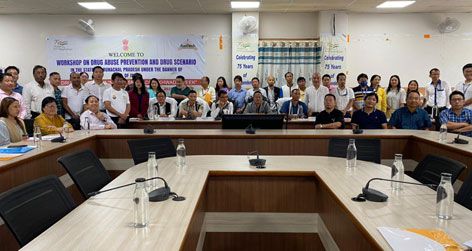 ITANAGAR, 22 Jun: One-day workshop on ‘Drug abuse, prevention and drug scenario in the state of Arunachal Pradesh’ under the banner of GoI’s vision of “Drug-Free India” Nashe se Azadi Pakhwada week from 12-26 June, was organized by the department of social justice empowerment and tribal affairs at Dorjee Khandu State Convention here on Tuesday.

Officials from the directorate took part in the workshop.

Speaking on the occasion, SJETA director Yumlam Kaha termed drug and substance abuse ‘a serious problem’ which is adversely affecting the social fabric of the country.

He urged all the officers of the state to complete the online training course on drug abuse prevention in a time bound manner.

“With the support of responsible citizens, stakeholders, active CBOs/NGOs and the initiatives of the government, the drug menace in the state can be tackled,” he added.

Also present in the workshop was Naharlagun SDPO Dekio Gumja, who spoke on the role of police in curbing the menace of drug abuse and the mechanism being followed by the police department in this regard.

He also stressed to keep children away from drugs. The SDPO further stated that the complete eradication of drug menace in the state requires a whole range of community-based services for the identification, motivation, counseling, de-addiction, after care and rehabilitation.

Project Director NACO, DHS Riken Rina in her address emphasized on the need for cooperation among stakeholders to achieve the goal of a world free of drug abuse.

Later, a film on drug awareness, “I killed my son” was also screened.