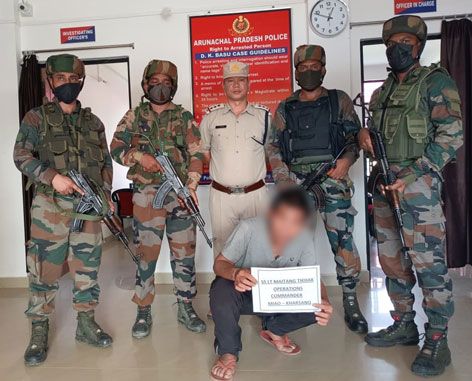 OLD CHAMPOO VILLAGE, 22 Jun: One self styled lieutenant and area commander of ENNG Maitang Tikhak was apprehended by a joint team of Lekhapani battalion of Indian army and Miao police during an operation launched here under Namphai circle of Miao subdivision, Changlang district on Tuesday evening.

On interrogation, Maitang Tikhak who joined the outfit in December 2021, revealed that he was involved in training cadres of the outfit on handling of weapons, drills and explosives. He also revealed his role in carrying out extortion activities in Miao – Namphai – Kharsang areas ever since he joined the outfit.

The security forces recovered a smartphone with various incriminating materials and videos, along with Aadhar card and voter ID etc. from his possession.

The security forces have been in the hunt for him and after much effort the operative in question could be apprehended.

The arrest will undoubtedly give a major blow to the extortion network and militancy in Miao-Kharsang area.