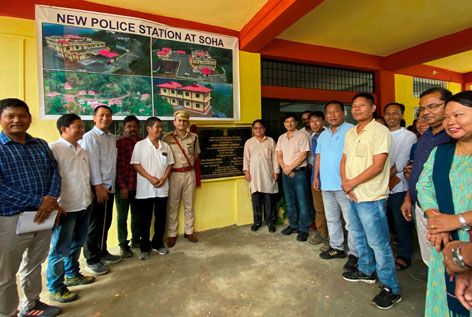 Addressing the public in Soha, Lowang said that, “with the inauguration of these two major projects, the long cherished dream of the people of Soha circle and nearby areas has been fulfilled.”

Lowang said that the establishment of a police station in Soha would instil a sense of security among the people of the area and the circle “because people of Soha area have experienced untold law and order problem in many occasions due to fighting of insurgents.”

Tirap DC Taro Mize, who was also present, assured to provide the benefits of government schemes to the people of Soha area, while SP Kardak Riba expressed hope that the new police station would “definitely reduce law and order problem in the area.”

He said that 34 police personnel, including an officer-in-charge, will be stationed at Soha.

According to Khonsa RWD EE Nending Bath, the police station in Soha was funded under the TCL Action Plan by the union home affairs minister, “and the 15-metre RCC bridge was constructed under the PMGSY from Longkhong to Natun Kheti, via Wasathong.”

The RWD is the executing agency. (DIPRO)