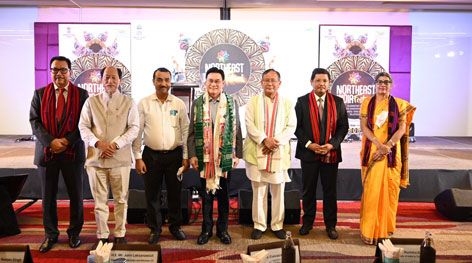 BANGKOK, 30 Jul: Arunachal Pradesh Deputy Chief Minister Chowna Mein highlighted “the huge tourism potentials and investment opportunities” in Arunachal in his address at the inaugural session of the 2nd edition of the North East India Festival here in Thailand on Saturday.

He said that the 26 major tribes and over 100 sub-tribes of the state with their own distinct cultures and traditions celebrate a number of festivals round the year, making Arunachal a “land of festivals and colourful dances, where one can experience different kinds of tribal cultures and taste different local cuisines.”

Speaking on the religious and cultural similarities, Mein said that “Buddhism spread across the length and breadth of Arunachal with Mahayana Buddhism in western Arunachal like Tawang, Dirang, Bomdila and the central part of Arunachal like Taksing, Mechukha and Tuting, and Theravada Buddhism in Namsai and Changlang districts in the eastern part has its deep similarities with people of Thailand and South East Asian countries.”

He said that, apart from the 400 years old Tawang gonpa of the Gelukpa sect and the 400 years old gonpa in Mechukha of the Ningmapa sect, “the Golden Pagoda in Namsai district has become a popular tourist destination.”

Considering the religious and cultural similarities, Mein proposed creating a “Tai tourist circuit, apart from the Buddhist circuit, in the region to attract Buddhist devotees and Tai tourists from the South East Asian countries, including Thailand, to the Northeast region.”

Mein further stated that, apart from investment in tourism and industry, “Arunachal Pradesh has huge scope for investment in agriculture technology, agro-food processing industries, and in hydropower sectors, because of the large-scale production of good quality agriculture products like ginger, turmeric, large cardamom, oranges, kiwi, etc, and its capacity to generate more than 50,000 mw hydropower.”

He informed that the Arunachal government is ready to provide single-window clearance and necessary approvals in a time-bound manner to investors.

“Improved road communication due to fast developing highways and air connectivity in prominent places across the state in recent years have made major tourist places like Pasighat, Tezu, Ziro, Aalo, Tawang and Mechukha easily accessible to tourists,” he said.

The three-day festival will showcase the cultural similarities between India and Thailand and the cultural diversities of Northeast India.

Industrialists, tour operators and cultural troupes from Thailand and Northeast India are participating in the festival.

Arunachal’s Tourism Director Abu Tayeng, along with officials from the tourism department, tour operators and cultural troupes, is also participating in the festival.

Exhibition stalls have been put up by the Arunachal tourism department and the Tai Khamti Heritage & Literary Society at the venue. (DCM’s PR Cell)