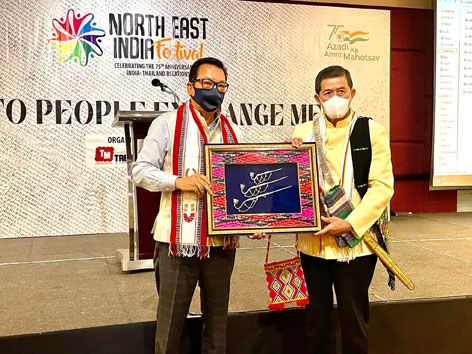 BANGKOK, 31 Jul: Arunachal Pradesh Deputy Chief Minister Chowna Mein said that the Indian government considers Thailand “a trusted and valued friend and one of our closest partners in Southeast Asia.”

“The 75th year of India’s independence coinciding with the 75th anniversary of diplomatic relations with the Kingdom of Thailand has given us an opportunity to celebrate the friendship between two countries with the North East India Festival, which shares common history, migration and cultural similarities,” the DCM said, adding that India’s ‘Look East’ policy “corresponds to Thailand’s ‘Look West’ foreign policy.”

Stating that Northeast India is considered the gateway to India for the South East Asian countries, Mein said that the India-Myanmar-Thailand Trilateral Highway, which runs from Moreh in Manipur to Mae Sot in Thailand, via Myanmar, “aims to establish seamless connectivity between Northeast India and South East Asian countries, as envisioned by Prime Minister Narendra Modi.”

“It is the vision of the prime minister of India to connect Northeast India with the South East Asian countries through waterways, airways, railways, roadways and e-ways, which will further facilitate people-to-people connectivity,” he said.

The DCM also spoke on the importance of the Stilwell Road “for facilitating people-to-people contact with the South East Asian countries through Myanmar, which will also help to boost travel and tourism and border trade.”

Earlier, the people-to-people meet was inaugurated by Mein and Thai-India Friendship Association president Korn Dabbaransi, in the presence of Assam’s Revenue Minister Jogen Mahan and Ambassador of India to Thailand, Suchitra Durai, among others.

Eminent academicians, scholars and historians from Thailand and NE India participated in the meet and deliberated various aspects of the historical and cultural links between the Thais and the Tai people of Northeast India. They also exchanged ideas and views on opening new vistas of relationships beyond shared history and commonalities.