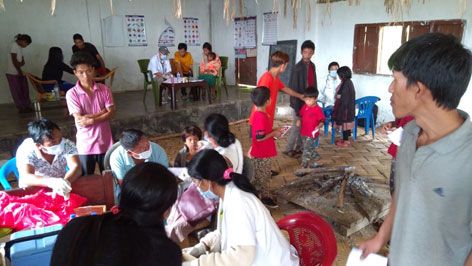 KHONSA, 31 Jul: Following the death of 9 children aged between 3 and 10 years due to a diarrhoea outbreak in Lazu circle of Tirap district, DMO (i/c) Dr Obang Taggu said that “the exact reason is yet to be ascertained as stool and water samples have been sent for further analysis.”

The situation is being constantly monitored by local MLA W Sawin, DC T Mize, and others, and a medical team has been formed to be stationed at Lazu for constant examination and treatment.

An ambulance has been arranged to lift serious patients from Pongkong, Longliang

and nearby villages to the district hospital here.

The DC has instructed the medical team to “stay at the village community hall to monitor the situation closely and be available 24/7 for any emergency requirements.”

“Students and panchayat leaders have been engaged to create awareness and convince the villagers to cooperate with the medical team and render their services, as earlier medical team had a hard time convincing the villagers to come for test and symptom assessment as they believed it to be associated with evil spirit,” the Tirap DIPRO informed on Sunday.

The DIPRO quoted Lazu PHC MO Dr AK Sen Gupta as saying that the situation is improving as there has been no further report of death.