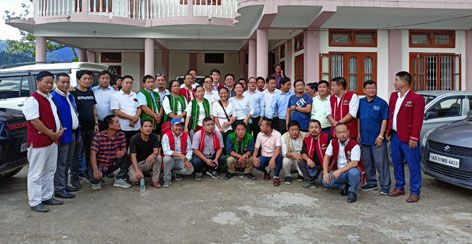 DAPORIJO, 1 Aug: A public meeting was held here in Upper Subansiri district on Monday to discuss the heliport issue.

The people here had strongly protested against the construction of a boundary wall around the proposed heliport, which falls within the airfield area.

MLAs Nyato Dukam, Taniya Soki and Rode Bui, along with other stakeholders of the district, headed by the Tagin Cultural Society (TCS), attended the meeting at Singhik Hall here to discuss the contentious issue.

The public has been protesting against the construction of the boundary wall around the heliport area for months.

During the meeting, it was resolved that the wall around the heliport site will be allowed to be constructed, and that a part of the land will be made available for the public’s use.

The construction of the boundary wall will start in October, and the fund for the purpose will be provided by the MLAs.

It was also decided that strict action will be taken against individuals who encroach on the airfield, and that the district administration will under no circumstance entertain land allotment in the airfield area.

MLA Bui said that “every development in the society is possible through the cooperation of public and government for the greater interest of the society,” and added that “all projects are for the welfare of the area and public.”

Dukam assured the public that “every possible measures have been taken to protect the land in airfield.” He further said that “no encroachment will be allowed and left-out land will be judiciously used for public wellbeing.”

Dukam appealed to social media users to “use the platform for the betterment of the society as a whole and refrain from trolling others based on speculation.”

Soki clarified that “there is no ill-intention by any legislator of Upper Subansiri district to encroach the portion of the land carved out from the airfield for heliport.”

He further informed that “the proposal and documentation to have a heliport in the airfield was started in 2014.”