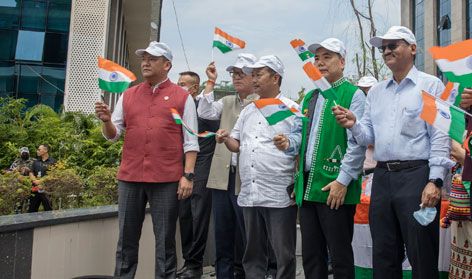 Speaking on the occasion, the CM said that “this year we are celebrating 75 years of India’s independence, and to mark the occasion, citizens of the country are encouraged to hoist the national flag at their homes from 13 to 15 August.”

He lauded the association for launching the campaign and selling national flags to government employees, but added that “merely buying the flag isn’t the purpose; one must own it to accord highest respect and honour.”

The CM said that “all efforts are underway to make the campaign a success to cover 4 lakh households in the state.

“All deputy commissioners, administrative officers, including the elected members are to ensure that the national flag reaches every household,” he said.

Khandu appealed to the people to ensure that the national flag is hoisted at their houses “with dignity, following all the rules governing the display of the tricolour.” (CMO)