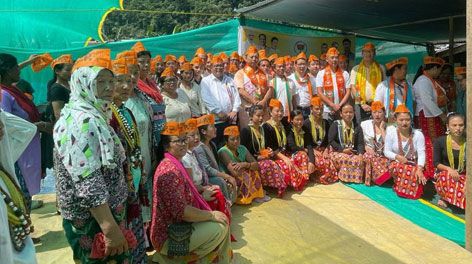 SESSA, 7 Aug: Thrizino-Buragaon MLA Kumsi Sidisow assured to allot fund for the construction of a community hall for Sessa and Elephant areas, during a ‘booth sashaktikaran abhiyan’ held here in West Kameng district on Sunday.

“Demand for the construction of a community hall by the local denizens was made in 2019, but due to Covid-19, it was not materialised. However, this year I will confer the required funds, amounting to Rs 25 lakhs each, for Sessa and Elephant within a stipulated timeframe,” he said.

He also informed that “a recommendation, under the supervision of Environment & Forest Minister Mama Natung, has been sent to the central government for the construction of a forest guesthouse under the ecotourism project in Sessa.”

“The Sessa orchid sanctuary is well known for its flora and fauna, as well as for tourist footfalls; so, in view of its importance and without disturbing the environment, we have decided to construct one forest guesthouse for ease of tourists and researchers,” Sidisow said.

Earlier, responding to a memorandum, he assured to allot fund for the construction of a suspension bridge at New Sessa.

Sidisow, who is the local MLA, informed that the 2.5 mw Sessa hydel power project has been restored and a separate connection from the Bhalukpong power grid will be provided to the area.

Speaking about the ‘booth sashaktikaran abhiyan’, he urged the BJP workers to “work unitedly, leaving behind any differences, and help the common people to get the schemes and projects of central as well as state government.

“We should pull up our sleeves to work for the betterment of common people and help the BJP party to win again in 2024 election,” he said.