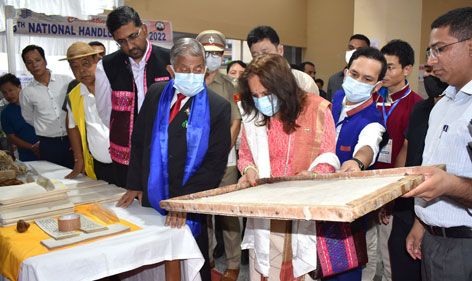 ITANAGAR, 7 Aug: Governor BD Mishra called upon the people of the state to take pride in their traditional attires and promote them among the younger generation.

Participating in the 8th National Handloom Day celebration at the Dorjee Khandu State Convention Centre here on Sunday, the governor urged the youths to connect with their roots and practice their traditions.

“If they break the connection with their roots, our culture will disappear and this we must not allow to happen,” he said.

Mishra also advised the people to “go for Arunachali organic products for food; use traditional loin loom, handloom woven dresses, and ensure toilets in every home.”

As part of the ceremony, the governor honoured weavers with state awards.

The state award carries prize money, a memento and a certificate.

Conceptualised by Misra, produced by the IPR directorate and filmed by Maya Films, Bangalore, the documentary highlights the roots of loin loom weaving and its history, traditional attires, and the uniqueness and beauty of its products.

MLA Rode Bui, along with several SHG members and officials of the textile & handicrafts and the sericulture departments attended in the programme.

Earlier, the governor inaugurated the state handloom expo. He along with his wife and Bagra interacted with the artisans and weavers. (Raj Bhavan)