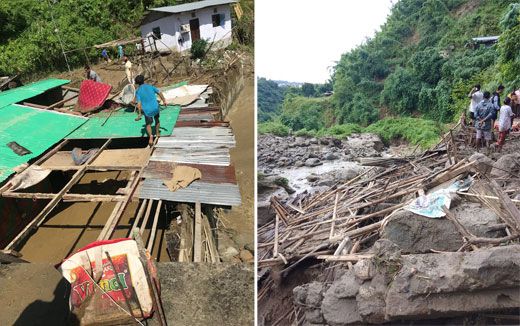 ITANAGAR, 8 Aug: Heavy rainfall that lashed the Itanagar Capital Region (ICR) in the wee hours of Monday left trails of destruction in its wake.

A 38-year-old woman, identified as Rina Gwala, died in a landslide triggered by rain at the Lobi Kola Camp in Itanagar. Her body was retrieved from near her house. She was a native of Koruwa Basti in Assam.

Rainfall measuring 87.40 millimetres, which lasted for hours, triggered flashfloods, causing destruction in various locations. In the Lobi area, the culvert and the suspension bridge were reportedly damaged.

Flooding also wreaked havoc in the Donyi Polo area in Itanagar. According to the ICR district administration, seven houses and two shops were fully damaged in Itanagar circle and 14 kutcha houses were partially damaged.

It is also reported that 11 cars and two-wheelers and some livestock were washed away by floodwaters.

The government ME school in Puroik Colony in Papu Nallah was flooded for hours in the morning.

The district administration estimated that nearly 5,000 people were affected by the floods.

Immediate relief is being provided to the affected persons, and ex gratia has been granted to the next of kin of the deceased.