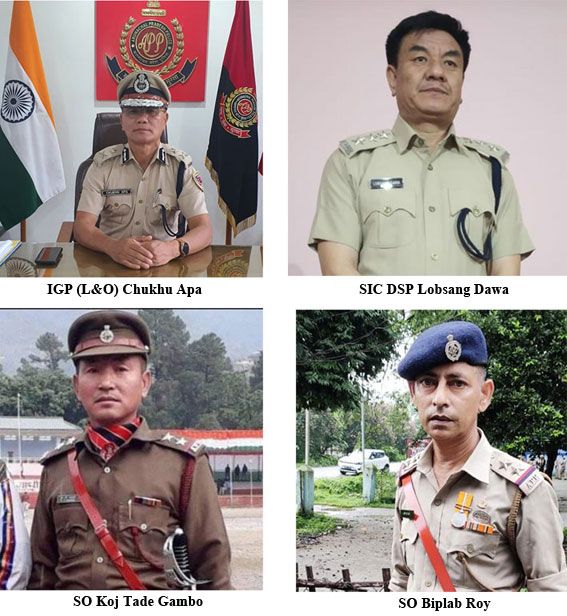 On the other hand, Station Officers Koj Tade Gambo and Biplab Roy have been awarded the Fire Service Medals for their meritorious services.

The medal is awarded for either gallantry or distinguished service, with the gallantry version of the medal being accorded precedence.

The medals are awarded annually on Republic Day and Independence Day.

Born to Chukhu Teti (father) and Chukhu Yemin (mother) on 1 June, 1966 in Kebi village in Lower Subansiri district, Apa is one of the most decorated police officers in the state, known for his upright personality, honesty and towering integrity.

He joined the Arunachal Pradesh Police Service as DSP in 1992. He was posted to Roing and the PTC in Banderdewa during the initial stage of his career. Apart from brief stints as the SP of West Kameng, Lohit and Lower Subansiri districts, Apa spent a longer term in the Itanagar Capital Region as SP.

He was inducted into the Indian Police Service (IPS, AGMUT) in 2002.

Apa has been instrumental in counter-insurgency operations and maintaining law and order in the state. He is a recipient of the State Gold Medal twice, a silver medal, and the President’s Police Medal for meritorious service.

In 2011, he went on central deputation to the Intelligence Bureau and was posted as station chief of Mizoram for four years. Later, he was posted at the Indian embassy in Kabul, Afghanistan, as counsellor in 2017. He returned to the cadre in 2020 and has been holding the IGP (L&O) post since then.

SIC DSP Dawa is a native of Thembang village in West Kameng district. He joined the state police service as a sub-inspector in 1989 and was promoted as DSP in 2020. Just after promotion, Dawa took charge as the officer-in-charge (OC) of the SIC.

During his short stint as the SIC OC, Dawa was instrumental in cracking many high-profile cases under the SIC. The President’s Police Medal has been awarded to him in recognition of his sincerity and dedication to service.

Station Officer Tade, who has been awarded the medal for meritorious service, is a native of Dutta village in Lower Subansiri district. He joined the fire service in 1996 as a fireman, and was later promoted as station officer.

Currently, Gambo is serving as the OC of the Itanagar fire station.

Station Officer Roy, who is posted as the OC of the Tezu fire station in Lohit district, is a native of Kolkata, West Bengal. He joined service as a fireman in December 1989 and was promoted as SO in 2016.