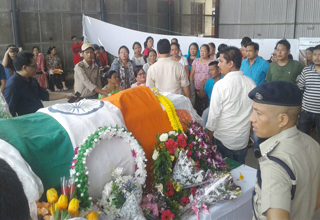 ITANAGAR/NEW DELHI, Sep 5: The state government has declared two days state mourning on September 5 and 6 as a mark of respect to late Jomde Kena.
During the period of state mourning, the National Flag will be flown at half-mast throughout the state, while no official entertainment will be conducted.
All the offices, government undertakings and educational institutions under the Government of Arunachal Pradesh will remain closed on September 6.
The state government has further decided to accord state funeral to the departed leader, which will take place on Wednesday.
Kena (52) died on Monday night at a private hospital in Guwahati in Assam.
In an official statement, Prime Minister Narendra Modi expressed his grief over the demise of Kena and extended condolences to his family and supporters.
Governor P B Acharya and Deputy Chief Minister Chowna Mein have also expressed shock and grief over the untimely demise of Kena.
“In his death, the state has lost a young and dynamic leader and a seasoned politician,” the Governor said in a condolence message to Dajum Kena, wife of late Kena.
The Governor and his wife Kavita Acharya prayed to almighty to give enough strength and courage to the bereaved family members to withstand the tragedy.
Secretary to Governor Vinod P Kavle and Aide de Camp (ADC) to Governor, Dr Irak Bagra laid the wreath on the mortal remain of late Kena on behalf of the Governor, who left for Nagaland earlier in the day.
The Deputy Chief Minister on behalf of his family members and the people of Namsai district conveyed deepest sense of condolences to the bereaved family members and relatives of Kena and prayed for eternal peace of the departed soul.
In his condolence message to the bereaved family members, Mein said, “Kena had a charming and amiable personality and was one of the most able, efficient and performing ministers in the State Cabinet. During his short tenure as a Health Minister of the state, he has initiated measures to bring in reforms and improvement in the health delivery system. His contributions to the people of Arunachal Pradesh as a Health Minister and Deputy Speaker of the State Legislative assembly will always be remembered in the days to come, Mein said.
The officials of Civil Secretariat deeply mourned the death of Kena and observed two minutes silence as a mark of respect to the departed soul.
“Late Jomde Kena will be remembered as one of the extraordinary politician with rare political acumen and administrative skills which made him a distinct leader in the history of Arunachal Pradesh,” a message from the Chief Secretary and others read.
Former Chief Minister Gegong Apang deeply mourned the untimely demise of Kena.
“I am deeply shocked and saddened to hear the death of Kena, who was a very promising and popular leader of not only the Galo community representing Gensi-Likabali Assembly Constituency, but whole of the state of Arunachal Pradesh,” Apang said.
“Kena’s death has caused indeed an irreparable loss not only to his family members but also for the state as a whole. The void created by his death will not easily be filled in even in the distant future,” he added.
Messages are also pouring in from various organizations, political parties and leaders extending their condolences on the demise of Kena.
The rank and file of Arunachal Pradesh Congress Committee (APCC) deeply mourned the death of Kena.
“I’m deeply saddened by the untimely death of Kena. He was a man of simplicity and a veteran leader with great vision, whose immense contribution for all round development and welfare of the society will always be remembered by the people of the state”, APCC President Takam Sanjoy said in a condolence message.
The National People’s Party (NPP) described Kena’s death a great loss for the state.
“In his death, the people of the state have lost a seasoned politician, who worked for development of the state during his long political career. He will be always remembered by the people of the state for his humble nature and honesty,” said NPP Spokesperson and Vice President Nima Sangey Saling in a message.
Legislators Kamlung Mosang, Paknga Bage, Wanglam Sawin and Tirong Aboh also deeply mourned the death of Kena.
The legislators said that the memory of his brilliant leadership will remain a source of inspiration and encouragement to all his colleagues and friends, and that the people of the state and community will always feel his loss.
The Tirap DC on behalf of the people also expressed deep anguish and sorrow over the sudden and untimely demise of the health minister, while the Arunachal Pradesh Information Commission held a condolence meet and prayed for the family.
Officials of the Directorate of Health Services, Medical Education, Family Welfare and Tomo Riba Institute of Health and Medical Science assembled in a condolence meeting at the DHS office premises observed two minutes silence as mark of respect to late Kena and prayed for eternal peace of the departed soul.
They also conveyed heartfelt condolence to Dajum Kena, wife of late Kena, to withstand the tragedy.
Meanwhile, the All Arunachal Pradesh Students Union, Arunachal Pradesh Doctors Association, Indigenous Faith & Cultural Society of Arunachal Pradesh; Arunachal Pradesh Catholic Association; Lower Siang Elite Forum, Itanagar; Jigo Yego Students’ Union (Likabali); All Arunachal Pradesh Labour Union; Arunachal State Pollution Control Board; Arunachal Pradesh Congress Seva Dal; National Institute of Technology, Yupia, National Youth Project, Kerala Kala Samskarika Vedi, Arunachal Pradesh Bhrastachar Virodhi Sangathan and All Arunachal Pradesh Public Transport Federation deeply mourned the demise of Kena and conveyed their deep sense of condolences to the bereaved family and prayed for the eternal peace of the departed soul.