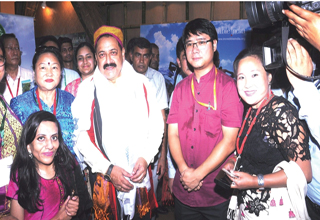 ITANAGAR, Sep 12: Curious travellers made a bee line in front of the Arunachal Tourism stall to know about Arunachal Pradesh and showed keen interest to travel to the state during the recently concluded two days “North East Calling”-a tourism promotional event organized by the DoNER Ministry in New Delhi.
The travellers mainly enquired how to obtain Inner Line Permit, PAP and RAP, and the travel time to reach Arunachal Pradesh.
The event aimed at showcasing North East as a potential tourism destination as well as bridging the gap between the people of the region and rest of the country, creating awareness about the region.
The event showcased various features of North East region in order to attract investment in tourism, skill development, horticulture and floriculture, medicinal plants, bamboo development, culture and heritage and above all organic farming.
The event also focused on various issues concerning the region and covered sectors, like skill development, agriculture, handloom and handicrafts, tourism, food processing, livelihood, micro finance and start-ups, among other sectors.
Cultural programmes were part of the event, where folk music and dances of North-East were performed and displayed.
Several self help groups from the state, including NERAMAC and NEHHDC also participated.
Other highlights of the events were display of handlooms and handicraft products, cuisines etc.
The two days event from September 9 and 10 was inaugurated by Union Minister of State in-charge Ministry of DoNER, MoS PMO Personnel, Dr Jitendra Singh.
The team from the state Tourism Department was headed by Secretary Tourism & Planning Dr Joram Beda. Officials of Delhi Tourism Office, Arunachal Bhawan also participated.