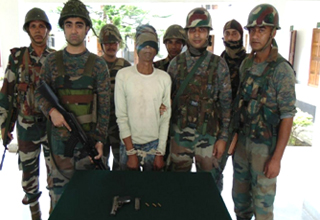 ITANAGAR, Oct 15: Security forces apprehended two NSCN cadres during two separate operations in Changlang district on Sunday.
The apprehended cadres were identified as NSCN(R) Yugdi alias Dangche Cena, who is a Myanmarese, and Town Commander of Changlang Town SS Cpl Hangnong Pangtha of NSCN(R), according to Army sources.
While the NSCN (K) cadre was apprehended from Longman village early in the morning, the other cadre was nabbed in the evening. The NSCN (R) cadre is a resident of Jangji Havi of Changlang.
Two Pistols from the nabbed cadres were seized along with live ammunitions. Both the cadre was allegedly involved in extortion activities in Jairampur circle and Changlang.
The NSCN (K) admitted during interrogation that he had been an active member of the outfit since 1984 and involved in extortion activities in Changlang and Tirap districts, the sources said. (With additional report from DIPRO, Changlang)