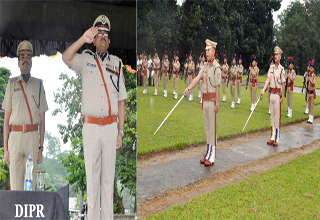 BANDERDEWA, Oct 21: ‘370 police personnel have been killed on duty in the whole country between August 31 to September 1 last, and of 370 sacrifices, two were from Arunachal Pradesh, namely constable Prodip Tayeng and Nada Umbing’, said State DGP, Sandeep Goel while addressing police personnel during the Police Commemoration Day, observed at the Martyr’s Memorial Ground at PTC here on Saturday.
The day is observed every year since 1959 to commemorate the 10 brave police personnel who laid down their lives on this day fighting the Chinese troops at Hotspring in Ladakh.
Further, while reading out the details of 370 martyrs across the country, the DGP lauded the courage shown by the said personnel in protecting the lives and properties of the public and requested the society to recognise the priceless services of the police personnel.
Earlier, DGP Goel, IGP N Payeng, DIGP Tushar Taba, Principal PTC, Dr Navdeep Singh Brar, SP Fire Services Kime Aya, CO 1ST AAPBN, Tojo Karga, Dr Guriqbal Singh Sidhu and other police officials laid wreaths and observed silence as a mark of respect to the police personnel.
A parade led by DSP (Trg) PTC, Dusu Kaling and Band Play were also organised as a mark of respect to the police martyrs.