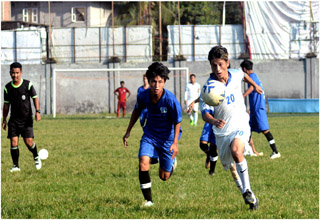 ITANAGAR, Oct 28: Deed Circle FC went down fighting 1-2 to Todo United FC in the T K Arunachal Super League at Rajiv Gandhi Stadium in Naharlagun.
After a barren first half, R D Karma gave Todo United 1-0 lead in the second half before Captain Tarh Rajkumar scored through a penalty kick to make it 2-0.
Deed Circle put their all out efforts into the game but their efforts fell short in 1-2 loss to Todo United.
The only goal for Deed Circle was scored by Boa Piku in the 79th minute.
On Sunday, Capital Complex will play against Nirjuli United at 12.20 PM and Bamang Taji FC will face Gora Makik SC at 2.20 PM.