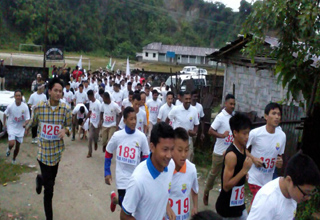 ITANAGAR, Nov 1: The Directorate of Sports organized a mini-marathon Run for Unity for men and women on Tuesday to mark the Rashtriya Ekta Diwas. Hundreds of people participated on the occasion with the motto of maintaining the national unity and integration among the citizens and youths of state and country.
The Marathon which started from Chimpu culminated at IG Park. The run was flagged off by the Secretary Sports and Youth affairs Dani Salu in presence of several officers, youths and local people.
Prizes were distributed by the state BJP President Tapir Gao at IG Park. Addressing the gathering Gao called for preserving the national unity and integrity among citizens by maintaining communal harmony. He exhorted the youths to work hard for the development of state and country.
Gao remembered Sardar Patel on his birth anniversary and former PM Indira Gandhi on her death anniversary. He elaborated the role of the two national leaders and their contribution in nation building.
Among others Director Sports Tadar Apa, CRPF Commandant 138 Bn Paras Nath, Principal SLSA Tabia Chobin, City Unit BJP President Tarh Soping, Chief Spokesperson Tadar Dominic were present on the occasion.
In girls category Anung Wangsu, Abur Siboh and Yabang Tali won 1st, 2nd and 3rd prizes respectively with prize money of Rs 10,000, 7,000 and 5,000 respectively. In the men’s category Bamo Tanang, Karbu Kena and Nganpho Ngandam finished 1st, 2nd and 3rd. Consolation prizes were also distributed on the occasion.
Run for Unity were organized at Hawai in Anjaw and at Yingkiong in Upper Siang on the occasion of Rashtriya Ekta Diwas celebration on Tuesday.
In the 3 km unity race at Hawai, Anston Ngadong and Rowatso Tawsik, both from GHSS Hawai won the 1st and 2nd position in boys’ category.
In girls category, Elushi Ngi, JNV Hawai and Atuishi Longling bagged the 1st and 2nd position. In general category, Aho Pul, MO, CHC Hawai and Brena Kri, CA, DC Office stood first and second.
GHSS Hawai Scout (Boys) was declared best contingent in March past.
Speaking on the occasion, Anjaw Deputy Commissioner, Mamata Riba called upon one and all to play a important role in strengthening the unity and integrity of the country.
Rashtriya Ekta Diwas was observed in a befitting manner at Aalo general ground.
Earlier in the day, West Siang Deputy Commissioner, Swetika Sachan flagged off ‘Run for Unity’ wherein over a hundred people participated starting from Aalo General Ground to Aalo General Ground.
While paying homage to Sardar Vallabhai Patel, the DC appealed all to recall the late leader’s sacrifices for the unity and integrity of the nation.
The programme was followed by Pledge ceremony by DSP, Dr. Dorjee Wangchu Thongon and march past by Arunachal Police.
At Roing, Police and CRPF personnel organized march past rally at Roing township area here on Tuesday. The rally which was held from Mini Ghandhi Park to S.P office was joined by Scout & Guides team from various schools.
At Seppa too, various events like ‘Run for Unity’, march-past and cleanliness drive were organized to mark the day. (DIRPOs)