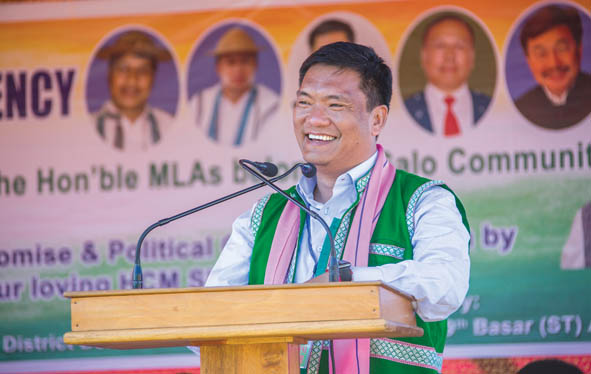 New minister to be inducted soon
BASAR, Nov 6: Chief Minister Pema Khandu on Monday gave the go-ahead for creation of Lepa Rada district curving out 29th Basar (ST) assembly constituency from the newly created Lower Siang district.
Addressing a public meeting at Todak Basar Memorial Stadium, the Chief Minister said the newly posted Deputy Commissioner of Lower Siang will be instructed to hold public hearing and all other necessary formalities required for demarcation of boundaries.
Once these exercises are completed and its report submitted to the Government of Arunachal, the matter for district creation will be placed in the cabinet for approval, he said.
Pema assured that the exercises for creation of this new district will be completed by 2019.
He said the demand for Lepa Rada district has the support of BJP party as well from Minister of State for Home Affairs, Kiren Rijiju.
The Chief Minister said he is never against district creation for it will bring in administrative convenience and take administration to the door step of the people. He, however, said not all 60 constituencies can have districts of their own and random decisions for district creation made under public pressure cannot continue. He said demands for several new districts are still pending and newer ones cropping up.
Pema cautioned the people not to limit their thoughts to their own community and to have thoughts for pan-Arunachal identity before demanding new districts. District creations have huge bearing on the financial position of the state, he said.
Earlier also districts were created but without creation of posts, making it non-functional, he said. The present government has started to make all the newly created districts functional by creating several new posts to fill up the vacancies.
The Chief Minister further announced to fill up the vacant ministerial berth in the state government from the Galo community, which was left vacant after the demise of former Health Minister late Jomde Kena. He said the granting of ministerial berth is not made on the basis of tribe and is purely a prerogative of the Chief Minister. However, considering the immense potential of Galo community to contribute to the development of the state, the decision to induct a new minister from the community will be taken after the discussion with the party. He appealed to the people to cooperate with the government on whoever is chosen for the post.
Highlighting on the achievements of the present government, the Chief Minister said the revenue generation has seen huge jump of Rs 227 crore within one financial year. He said in the financial year 2015-16, the state revenue was Rs 887 crores. But after he took over as Chief Minister in 2016, the revenue has increased to Rs 1114 crore in the current financial year 2016-17.
Pema expressed hope that with the GST, the revenue of the state is likely to increase further in the future with increase in tax base. He, however, said revenue may not hit high immediately as confusions over GST implementation still persists. He, therefore, appealed to the traders to immediately register themselves with GST in the interest of the state.
The Chief Minister said the state government under BJP is giving priority to connectivity that includes rail, road, air and digital connectivity. He said ten new railway lines is in offing which will immensely benefit the foothill areas of the state, giving rise to economic activity in the coming years. He also said instructions for immediate completion of Likabli-Bame road will be issued to the concerned executing agency.
Speaking on the occasion, Home Minister Kumar Waii assured his full support on the creation of Lepa Rada district. State BJP President Tapir Gao said the BJP party stands always for the interest of the people and its nation.
Earlier in the day, the Chief Minister inaugurated the Circle Office and a welcome gate of Sago village. He also inaugurated a multipurpose hall.
Deputy Speaker Tumke Bagra, APEDA Chairman cum Aalo East MLA Jarkar Gamlin, Nari-Koyu MLA Kento Rina and Parliamentary Secretary Gojen Gadi also spoke on the occasion. (PR cell, CMO)