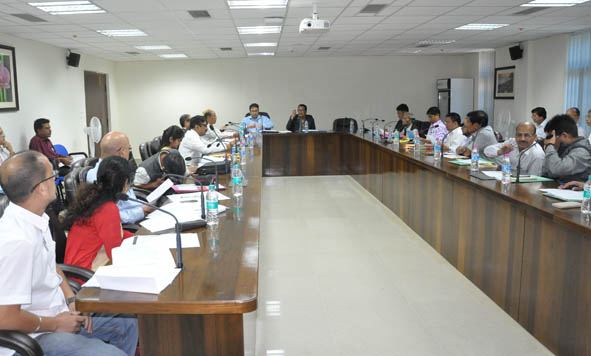 ITANAGAR, Nov 6: Deputy Chief Minister Chowna Mein on Monday took stock of the half-yearly revenue realization by different tax and non-tax departments of the state and expressed his displeasure over the poor revenue collections in the first half of the year as compared to the targets given to each department for the year 2017-18.
He asked officials to make strategies to augment the revenue generation and to revisit the rates, besides conducting special revenue drives.
He also directed the Finance Department to set district wise target for each district and let it be monitored by the respective Deputy Commissioners to achieve those targets. He also emphasized on arresting the revenue leakage citing that Arunachal Pradesh is a resource crunch state.
Development Commissioner (Finance), Ashish Kundra said that the half yearly revenue realization by various heads is essential to see that the departments achieve their targets by the end of the year. He also said that strategy for augmentation of revenue generation is necessary to improve the revenue collection by end of the year.
Various heads of departments presented the revenue collected till the end of September 2017. They have also cited the reasons behind the poor revenue realization so far and the steps taken by them to improve the revenue generation to achieve the target by the end of the financial year.