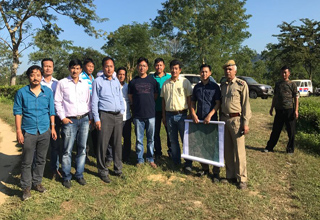 KANUBARI, Nov 12: Stating that public cooperation is very crucial for success of any programme APSCIT & e Governance Chairman cum MLA Gabriel Denwang Wangsu has called upon the people to extend support to the government agencies in executing people-friendly projects to usher development in the society in particular and state at large.
Addressing a development meeting of officers and public leaders on town planning here on Friday, Wangsu sought cooperation of all sections of the society in making Kanubari a planned and modern town to accelerate the pace of development in the area.
Stating that Kanubari has every potential that offers scopes for development of all sectors of economy, he assured to get it recognized as urban town while allaying fears and concerns of the people relating to functioning of urban local authorities in future.
The MLA also expressed gratitude to the Rujen Welfare Society and all prominent public leaders for willing to donate more than 50 hectares of land for developing New Kanubari Township and hoped this would pave way for making it a planned town. This would also further decongest the present township since all government and private establishments are set up in limited area without any space for town expansion, he added.
Earlier, Town Planner Likha Suraj, who accompanied by Assistant Town Planner Siyang Rebe arrived here to conduct preliminary survey to study feasibility of urbanization and extension of Kanubari Township, enlightened the meeting about the advantages of planned urbanization. He observed that Kanubari could soon host a large population in view of its topography and location.
Urbanization through proper master plan would boost growth and help in providing better civic services to the denizens, he said.
Earlier in the day, the MLA accompanied by the Town Planners, ADC Taro Mize, HoDs and public leaders visited various strategic locations and landmarks including TAH and ITI site of greater Kanubari Town. DIPR