ITANAGAR, Dec 5: West Siang will play against East Siang in the inaugural match of the final rounds of the 16th Tadar Tang State Level Football Tournament at Rajiv Gandhi Stadium on December 9.
All the 11 districts that qualified for the final rounds have been divided into four groups with winners and runners-up of each group advancing to the quarterfinals.
The qualifying rounds’ matches were organized at the zonal level and two top teams from each zone have qualified for the final rounds.
Group A comprises Capital Complex, Longding and East Kameng, and Group B comprises Lower Dibang Valley, West Siang and East Siang. Lower Subansiri, Namsai and Papum Pare have been placed in Group C. There are only two teams in Group D – Kra Daadi and Lohit.
The final will be played on December 20.
The tournament is being organized by the Arunachal Pradesh Football Association in collaboration with Department of Sports and Sports Authority of Arunachal. 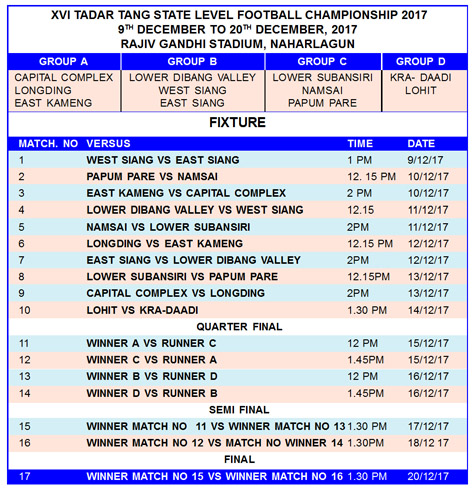