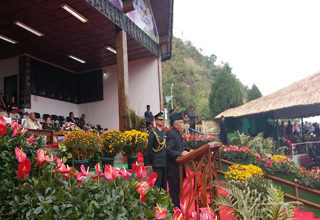 ‘Bring peace and tranquility in the region’

KOHIMA, Dec 9: Governor of Arunachal Pradesh, Dr BD Mishra on Saturday urged the people of the North East to make concerted efforts to bring “absolute peace and tranquility in the region.”
The governor was speaking during the Hornbill Festival celebration at the Naga Heritage Village in Kisama, 10 kms from here, which he attended with his wife Neelam Mishra.
“The Hornbill Festival showcases North East India’s rich cultural diversity, exotic locations, pristine green environment, and hospitable communities,” the governor said.
Saying that the hornbill is the state bird of Arunachal Pradesh, he said celebrating the festival brings the people of Arunachal Pradesh and Nagaland together. He extended an invitation to the people here to visit Arunachal Pradesh “for promotion of cultural exchange,” and invited the youths of Nagaland to come to Arunachal Pradesh for studies.
Recalling his association with Nagaland, the governor informed that, after getting selected for the Indian Army, he received his training with the Kohima Company at the Indian Military Academy in 1960, and did two tenures in Nagaland, in 1964 and 1967.
While in Nagaland, he said, his south Indian troops learned about the Naga culture and dance and arts, which they presented back home in Kerala and earned appreciation of the people there.
“This cultural bond has removed the barrier in the mindset of the people of other states, and they now appreciate the North East as an aesthetic land,” the governor said. (PRO to Governor)