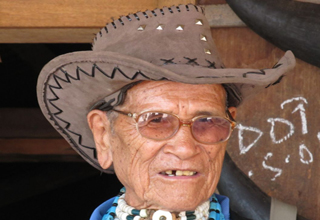 PASIGHAT, Dec 12: Noted Adi traditional Ponung Aabang singer and HGB of Bomi village, Mariyang Soso Pertin, died on Monday at the age of 97 years.
Hailing from Damro village, he had started his career in singing Solung Ponung Aabang in 1957, and continued till 2017.
His narration of Aabang has been aired several times by the Pasighat AIR station. He is survived by three daughters and two sons. His mortal remains have been laid to rest. (DIPR)