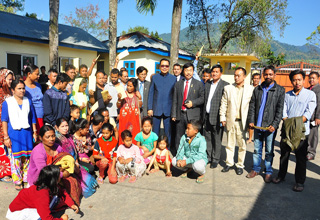 ITANAGAR, Dec 26: Deputy Chief Minister Chowna Mein on Monday met the families affected by the Niti Vihar fire incident at the temporary camp set up in Bungalow Number 9 here.
Sixteen families were affected by the massive blaze.
The DCM was accompanied by State BJP President Tapir Gao, former minister Nyato Rigia, and State BJP Secretary Nich Doni.
Interacting with the families, the DCM expressed his sympathies with them and assured that the government would do whatever is required to rehabilitate them.
He also distributed relief and cash assistance to the victims from his personal resource.
Ever since the fire incident took place, Mein has been extending support and providing relief materials, including ration, to the fire victims. He has also provided shelter to some of the victims at his bungalow.
The DCM has already instructed the Capital Complex deputy commissioner to disburse compensation and other relief materials to the affected families at the earliest.