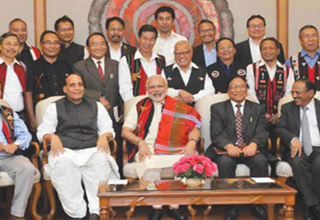 New Delhi, Jan 9: The Naga Hoho, an apex Naga tribal body, has sought Prime Minister Narendra Modi’s help in postponing the forthcoming Nagaland Assembly elections, saying that the vexed insurgency problem should be resolved first.
In a memorandum, the Naga Hoho said an exceptional situation has been prevailing in the north eastern state as a result of the ongoing negotiations for a peace accord with the militant group NSCN-IM.
“It is the unanimous view of the Naga people that the political solution or Naga peace accord is more important than elections and therefore, it has become imperative that the elections to the legislative assembly of Nagaland be deferred for peace and tranquillity,” the tribal body said.
Assembly elections in Nagaland, Meghalaya and Tripura are due in March and an announcement in this regard is expected early next month.
The expectations for a lasting peace have soared in Nagaland, which had been hit by insurgency for decades, after the Centre and the NSCN-IM signed a framework agreement in 2015.
The National Socialist Council of Nagaland (Isak-Muivah) (NSCN-IM) has been engaged with peace talks with the interlocutor of the central government since 1997, when it announced a ceasefire agreement after a bloody insurgency movement which started in Nagaland soon after the country’s independence.
Reminding the prime minister about his statement, soon after assuming office in 2014, that the Naga issue would be resolved in 18 months, the Naga Hoho said almost three years have gone “without finding any tangible solution”.
It also said more than 20 years have gone by since the signing of the Naga ceasefire and the beginning of the political dialogue.
The Naga Hoho said it has come to know that the Naga peace accord was at its final stage and likely to culminate in a very short period of time as the Centre’s interlocutor and the NSCN-IM had earlier issued a joint statement that they were closer than “ever before to the final settlement and hope to conclude it sooner than later”.
“We sincerely hope that your competent authority shall exhibit its political will and bring out a logical conclusion to this predicament. In the event of failure to defer the election process and ignite unwanted situation, the government of India shall be held responsible,” the tribal body told Modi in its memorandum.
During a visit to Nagaland in November last, President Ram Nath Kovind had said the state was at the threshold of making history as the final agreement on the Naga political issue would soon be arrived at and a lasting peace achieved.
On September 19, Nagaland Governor PB Acharya had said the vexed Naga issue would be solved within a few months.
Seeking to allay concerns of three north eastern states, Union Home Minister Rajnath Singh had said on 8 November that the territorial integrity of Arunachal Pradesh, Assam and Manipur would not be compromised while inking the final Naga peace accord.
The insurgent group NSCN-IM’s key demand is to integrate Naga-inhabited areas of Arunachal Pradesh, Assam and Manipur, which has been strongly opposed by the BJP-ruled states.