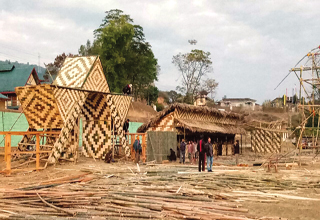 Correspondent
NAMPONG, Jan 15: With just five days remaining for the biggest festival of eastern Arunachal – the Pangsau Pass International Festival (PPIF) – Nampong MLA Laisam Simai, along with the Changlang deputy commissioner and other officers on Monday visited the festival ground here to take stock of the preparations.
Speaking on the sideline of the inspection, Simai expressed satisfaction at the progress of work, and assured that the 7th edition of the festival, in its international avatar, is all set to mesmerize the globe.
“From the inaugural event to the latest one, the festival has focused on uplifting the socioeconomic scenario of the secluded region. It single-handedly gave the region the exposure it was desperately looking for, and today, because of the festival, the isolated border tract has become the most developed pocket of the eastern belt,” Simai said.
The festival has successfully highlighted the various indigenous customs and traditions of the state, as well as enhanced bilateral and cultural ties with the neighbouring country, Myanmar, Simai said.
“PPIF is completely different from the other festivals of the state. It is not confined to one tribe or culture. Neither is it focused on highlighting one particular attraction,” he said.
The MLA said that the local community has extracted maximum benefit from the platform created by the festival.
Speaking about the festival’s uniqueness, he said that the PPIF is the only festival that provides the visitors the opportunity to explore the elegance of the neighbouring country, besides offering an eclectic array of cuisines, crafts and culture of Arunachal Pradesh and other sister states of the Northeast.
The other gems of the region that the visitors can revel in are Stilwell Road (From Ledo in Assam to Pangsau Pass); the largest war memorial of the Northeast (Jairampur); Hell Gate (Nampong), Hamilton Bridge (Namgoi), border bazaar (Pangsau Pass), and the Lake of No Return (Myanmar), Simai added.
“The many flaws seen as roadblocks in the previous editions have been rectified with the intention to make the festival as perfect as humanly possible, Simai said.
Adding that efforts are on to make the festival bigger and better than all the previous editions, the MLA sought the cooperation of each and every individual of the district in achieving the target.