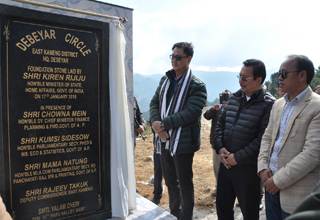 DEBEYAR/PAPU VALLEY, Jan 17: Stating that communication bottleneck was the main hurdle in the way of development of Arunachal Pradesh, Union Minister of State for Home Affairs, Kiren Rijiju was positive that with the completion of the Trans-Arunachal Highway (TAH), the state will witness rapid pace of development in days to come.
Rijiju said this after laying the foundation stone of the newly created Debeyar circle, some 25 km from Seppa in East kameng district on Wednesday.
In his address, Rijiju said that the Debeyar area would no more remain backward with the construction of the TAH, which would be completed by March this year.
The circle office will serve as a centre of development of the area which will cater to the needs of seven villages, he said.
Responding to the 12-point memorandum submitted by local legislator cum Parliamentary Secretary for RD Mama Natung, he assured to fulfil the demands in stages by 2019.
Acknowledging the contribution of RK Mission School in imparting quality education to the people of the state, he opined that the establishment of an RK Mission School at Lumdung would help to bring in behavioral changes among the youths.
He also announced to contribute Rs 30 lakhs from his own source in aid of the establishment of the school in the area.
Further, Deputy Chief Minister Chowna Mein announced to sanction Rs 3 crore for construction of an approach road to the RK Mission School after reaching Itanagar.
He also announced to provide fund for construction of a Circuit House at Lumdung.
Mein assured that the demands made by the people of the new circle will be fulfilled by the government, but said that it may take some time to meet all the demands.
He assured to provide fund for construction of infrastructure development of the circle office in stages and also assured to take up the construction of link road through the WRC field of Papu-Valley from Lumdung to Seba village and for three bailey bridges over the Papu River under RIDF next year, besides construction of another bailey bridge over Kameng River next year.
He also assured to look into their demands of placing fund for continuation of the paddy-cum-fishy culture at Papu valley and said that it would be included in his budget speech.
He asked the district administration and executing agencies of the TAH to see that mud and debris are disposed off at the right place so that it does not affect the paddy fields or diverts the flow of rivers.
Earlier, Mama Natung, while submitting the memorandum informed that the tourism project ‘Swadesh Darshan’ (worth Rs 50 crore), initiated by Rijiju in the area is nearing completion. He expressed hope that it would fully prove to be beneficial in promoting tourism potential of the area.
Former minister Hari Natung also spoke on the occasion.
Among others, Parliamentary Secretary for PHE & WS, Economics and Statistics Kumsi Sidesow, Hydropower Corporation Chairman Tungri Effa and youth leader Gumjum Haider were also present on the occasion.