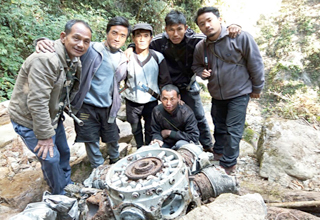 ITANAGAR, Jan 17: A group of enthusiastic youths from Kimin’s Papum Pare district of Arunachal Pradesh has found wreckage of a plane in far off hills near Bogi Nodi, bordering Assam and Arunachal Pradesh.
The team managed to unearth a few metal scraps from the site, which are believed to be the engine and radiator of a US Air Force plane used during the World War II (WW II) over the Himalayan range of Arunachal Pradesh.
“We believe it to be the wreckage of American planes used in WW II over the Himalayan range of Arunachal Pradesh, which was popular know as ‘hump’ among the US Air Force. The location and the engine model also support our assumption,” said team leader Taba Nobin from Kimin.
However, it needs proper verification by experts, he said.
He said that the lack of proper machinery and equipment restrained the team from digging the heavy metals out of the wilderness.
“We have managed to carry a few scraps of metal, and have marked the area with the help of GPS device and photographs,” he added.