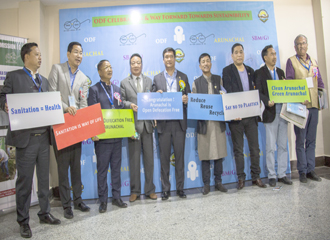 ITANAGAR, Jan 19: The state government organised an event in the auditorium of the Legislative Assembly complex here on Friday to mark the achievement of Open Defecation Free (ODF) status.
The journey towards attainment of ODF was shared on the occasion. It may be mentioned that Arunachal attained 100 percent ODF status on 31 December, 2017, as per the Base Line Survey (BLS)-2012 under Swachh Bharat Mission (Gramin). With this achievement, Arunachal ranks 7th in the country and second in the Northeast, after Sikkim, to become ODF.
Addressing an enthusiastic crowd, Chief Minister Pema Khandu credited the people of Arunachal Pradesh for the achievement.
“The long, strenuous journey, particularly because of the difficult and inaccessible terrain and communication bottlenecks, could not deter the strong determination of our dedicated SBM teams and all stakeholders, particularly the villagers, PRI members, GBs, district administrations and elected representatives,” Pema said.
“The achievement is rare for the reason that it came one year and 10 months ahead of the national target of 2 October, 2019,” Khandu said.
Congratulating all for the achievement, the chief minister cautioned them to ensure that the status is sustained.
“The Herculean task is to maintain the ODF status and not allow the ugly head of open defecation to raise its head,” he said. “Now that 100 percent ODF status has been achieved in the gramin level, the urban areas need also to be declared cent percent ODF,” the CM said, and directed the UD department to put in extra effort to achieve it.
Khandu also spoke on robust road, rail, air and digital connectivity which is gradually picking up pace in the state.
PHE & WS Minister Bamang Felix in his speech endorsed the chief minister’s appeal for maintaining sustainability of the ODF status in the state. He called upon the department officers to tighten their belts and perform so that the state can flourish. Felix also highlighted the role of deputy commissioners in the districts whose roles are primary in making any state or central programme successful.
Felix said that in order to maintain sustainability, the ODF status should be imprinted in the minds of the people. “Every citizen should take this as a religious responsibility,” he said.
He informed that the PHE & WS department has 2021 as the final target to provide drinking water to each household in the state as against the national target of 2022. He lauded the effort of the lawmakers, DCs, PRI members, NGOs, villagers, and other stakeholders for making the dream of ODF come true in record time.
PHED Chief Engineer (Sanitation), Toko Jyoti said there still is more work left, and appealed to the state government for continued support in sustaining the ODF status.
H Borah, Deputy Director General, Ministry of Drinking Water & Sanitation in his address termed the achievement a kind of miracle.
“Despite difficult terrain and hostile weather condition, Arunachal has achieved the ODF tag much ahead of the national target. Several other so-called developed states are still struggling to achieve this prestigious tag,” said Borah.
He informed that an independent body funded by the World Bank will soon visit Arunachal and verify the ODF claim.
Among others, Education Minister Honchun Ngandam, Art & Culture Minister Mohesh Chai, PHE Parliamentary Secretary Kumsi Sidisow, and Chief Secretary Satya Gopal spoke on the occasion.