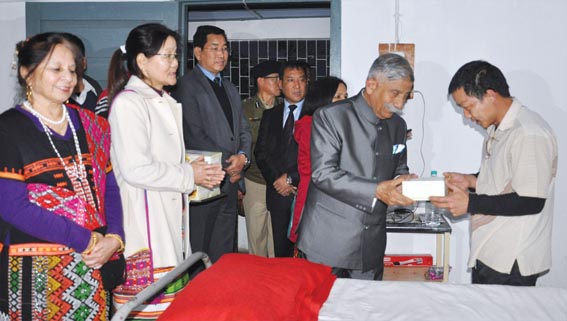 TEZU, Feb 8: Expressing deep concern over opium cultivation and drug addiction in Lohit and some other districts of the state, Governor Dr BD Mishra has called for a multi-pronged action against the menace, including destroying opium plants, taking action against people involved in drug trafficking, and providing alternative livelihood.
The governor said this during a public meeting here in Lohit district on Thursday.
“Drug abuse is destroying the whole society,” he said. “There must be social intensity and every member of the society must get involved in eradicating the drug menace.”
The governor urged gaon burahs, panchayat members and public leaders to cooperate with the district administration, the police and the Central Bureau of Narcotics to control and destroy opium cultivation.
“The central government is giving top priority to the development of the Northeast states through the Act East Policy,” he said, and added that lots of projects and programmes are being implemented in the region.
He urged the people to ensure transparent implementation of welfare schemes, and advised the district’s heads of departments to involve the common people in the implementation of schemes.
Deputy Commissioner Karma Leki briefed the governor on the centrally- and state-sponsored programmes and projects in the district.
Earlier, the governor visited the Indira Gandhi Government College and interacted with its faculty and students. He exhorted the girl students to prepare themselves to shoulder equal responsibilities as their male counterparts, and advised the faculty members to recognize the merits of the students and treat them as extended family.
He also shared his deep concern about opium cultivation and drug addiction with the college.
the governor also visited the zonal general hospital here, interacted with the indoor patients, and distributed fruits to them. The two also interacted with the inmates of the drug de-addiction centre. (PRO to Governor)