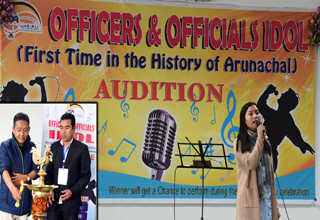 ITANAGAR, Feb 11: The curtain raiser to the first ever ‘Officers and Officials Idol’ contest was held here on Sunday, with the entrants going through the auditions.
Tourism Parliamentary Secretary PD Sona, who attended the function, hailed the capital complex district administration for organising the event, saying it would provide an opportunity to the officers and officials to show their singing talents.
West Kameng Deputy Commissioner Sonal Swaroop, who also attended the programme, said everyone should have a passion or a hobby that relaxes them, adding that nothing was more soothing and satisfying than music.
Stating that there is life beyond duty, Capital Complex Deputy Commissioner Prince Dhawan expressed hope that the programme would offer an opportunity to bring government servants together on a single platform.
Dhawan said the winners of the contest will get a chance to perform in the opening ceremony of the three-day Statehood Day celebration.
Ten candidates in the ‘officers’ category and seven in ‘officials’ category were selected. They will now face the district representatives in the mega audition slated to be held on 16 February. The results can be viewed on www.itanagar.nic.in.
The audition was judged by renowned artist Taba Yall Nabam, Papum Pare SP Tumme Amo, and Voice of Arunachal runner-up Nokngam Lukham.
The event is being organised as part of the Statehood Day celebration. (DIPRO)