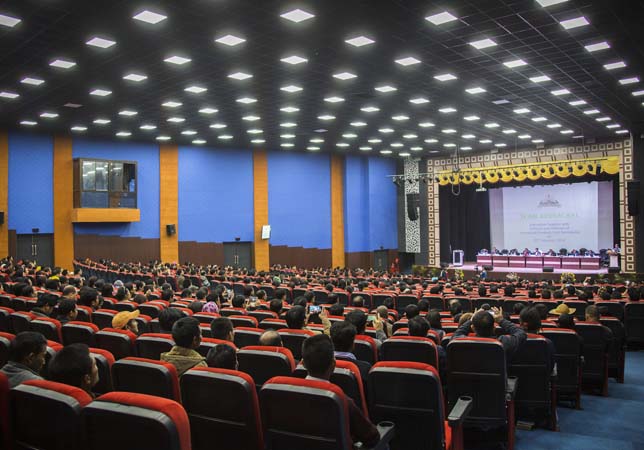 ITANAGAR, Feb 23: Chief Minister Pema Khandu today held an open interaction with state government employees working in the state civil secretariat right from the level of peons to commissioners at the newly inaugurated State Convention Hall here at IG Park.
“Our system is in a mess. We will all agree on that. But we need change and if I go on to change it all at once, there will be hue and cry at several levels. So we are working behind the scene to slowly and steadily change the entire system, wherein I need and seek your cooperation and support,” Pema said.
He blamed lack of proper planning in the past for backwardness of the state. He however said that the blame goes to everyone – the people, the employees and the politicians.
“Had we all worked in team spirit with sincerity, we could have harnessed our abundant resources to the optimum and become self-reliant by now. Sadly we didn’t do it,” he pointed.
Pema emphasized that it was not too late to start and urged the government employees to reform their mindsets and start to believe in their capabilities so that they start to individually contribute to the growth trajectory of the state.
“We in the government, including the employees, are the engine of the train called Arunachal Pradesh. If the engine does not pull with sincerity, the train of development will not move in the required pace. We have to lead from the front,” he said addressing more than thousand employees.
Pema said the role of leading the employees from the front is of the Commissioners, Principal Secretaries and Secretaries. He urged them to lead by setting examples.
The Chief Minister reiterated that the government always has a soft corner for its employees and therefore has initiated several steps for their welfare like enhancing retirement age, regularization of DPC, reviewing cadres of APCS, etc. He assured, going by the financial discipline and its effects, the government will also launch schemes for welfare of its employees.
“But we expect similar response from your side in the shape of dedication, sincerity and honesty towards your duty and active role in implementing welfare schemes and projects for the people,” he said.
Underscoring the importance of digitalization, the Chief Minister directed the IT Department to digitalize all offices by 2021 so that after 2021 all files are processed as e-files. To equip the employees with digital know-how, he said the government is contemplating to establish an state-of-art Administrative Training Center to impart training to state government employees. He said that lack of training for employees that has been hampering work culture in offices.
Asserting that there has been a positive change in work culture of the state, he appealed the employees to further change their attitude towards their duties that will result in better work culture if they dream a better place for their children. Once it is changed, everything will fall in place, he told the employees.
The Chief Minister reminded everybody of the cabinet decisions made on Thursday that he pointed are aimed at rooting out corruption like the law on money-lending and land ownership. He also urged the employees to participate in finalization of the Budget 2018-19 by submitting their suggestions through the recently launched web portal of the Finance department.
On the occasion 47 employees from various levels were awarded commendation certificates for their sincerity towards their given duties by the Chief Minister.
Deputy Chief Minister Chowna Mein and Chief Secretary Satya Gopal also spoke on the occasion.
Home Minister Kumar Waii, Education Minister Honchun Ngandam, PHE&WS Minister Bamang Felix, Animal Husbandry & Veterinary Minister Dr Mohesh Chai, Tourism Minister Jarkar Gamlin, Power Minister Tamiyo Taga, WRD Minister Kamlung Mossang, RD Minister Alo Libang and Deputy Speaker Tumke Bagra besides several Parliamentary Secretaries and legislators attended the event.