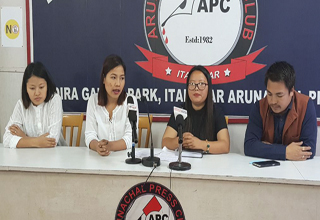 Staff Reporter
ITANAGAR, Feb 24: The All Arunachal Pradesh Students’ Union Women’s Wing (AAPSU WW) on Saturday condemned the recent series of rapes and murder against children in Tezu, Yingkiong, Daporijo and earlier in Namsai, and demanded that the state government take special measures for the security of women and children in the state.
Addressing reporters here at the press club on Saturday for the first time, AAPSU WW president Rosy Rangai said that “the place we call home isn’t safe any longer”.
“Earlier, cities such as Delhi were unsafe for women and children, but now Arunachal Pradesh, which we call home and are supposed to feel safe in, isn’t safe any longer”, Rangai said.
She also sought for women police stations in all districts of the state to make women and children feel secure.
AAPSU WW general secretary Kipa Yanu also asked for the government to initiate steps in this direction, and introduce sex education in all schools from the primary level to the higher secondary level.
She opined that such educational classes would help children be comfortable telling their parents or family if such sexual offences take place.
Other demands included strict implementation of the Protection of Children from Sexual Offences (POCSO) Act, 2012 and the Integrated Child Protection Scheme to provide children protection and a secure environment.
Taking the example of the alleged rape of a minor by a school teacher in Yingkiong, Yanu also sought that schools across the state strictly scrutinise teachers before hiring them, especially those of private schools.
On reports that several of the offences have been committed by people from outside the state, the union called for strict checks on Inner Line Permits (ILPs).
AAPSU vice president Meje Taku also said that while ILPs are checked when a person enters the state, the authorities need to keep a check on whether the timeline of their ILP has expired or not.
“The entry of a person is recorded, but their exit is not”, he said.
Taku also called on all the civil society and the government to join hands in curbing such incidents.
“What happened was wrong, but strong measures are needed against the perpetrators now”, he added.
WW convenor Bengia Mepu called for the government departments, NGOs and organisations to speak up for the victims and work efficiently to save women and children from such horrific incidents.
The union also sought that the Arunachal Pradesh Child Rights Commission be separated from the Arunachal Pradesh State Commission for Women so that proper attention could be provided to the needs of children.
It also sought members who are well experienced in the field and without any political affiliations.
Meanwhile, the Cultural and Literary Society of Mishmi (CALSOM) appealed to the state government to grant ex-gratia to the family of the five-year-old girl of Namgo Mishmi village, who was allegedly raped and murdered recently.
In a representation to the chief minister on Saturday, the society said, ‘the gruesome act of rape and murder of a five-year-old minor girl in Namgo Mishmi village and its aftermath incidents have jolted not just the state, but the entire nation.’
The society also demanded establishment of a police outpost at Medo town under Wakro circle to maintain law and order in an effective manner.
The society expressed deep sorrow at the tragic death of the promising kindergarten student and extended solidarity with the bereaved family in the hour of grief.
The CALSOM also expressed anguish over the recent spate of heinous crimes on minor girls in different parts of the state and vehemently condemned all the acts of sexual violence and extended solidarity with the victims.
It further requested the government to take appropriate steps to ensure protection of children.
It also called for strong judicial system and added that all the rape cases must be fast tracked to ensure swift justice to the rape and murder victims.
Community-based organisations also met Chief Minister Pema Khandu in a bre-budget meeting on Saturday here and placed the need to fast track the justice delivery system, especially in rape-related cases by equipping the courts at lower levels with sufficient manpower and basic facilities and by establishing police outposts in every administrative circle, to which the CM assured that it would be included in the ensuing budget 2018-19.