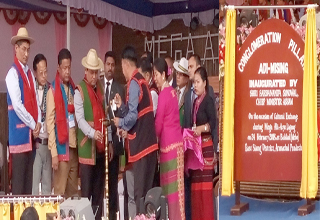 PASIGHAT, Feb 24: Assam Chief Minister Sarbananda Sonowal attended the three days mega Ali Aye Ligang festival on Saturday at Bakkul under Mebo subdivision in East Siang district, and appealed to the Mishing community to preserve its culture in the truest form and to prevent its dilution from the onslaught of modernity.
The festival is being celebrated jointly by the Adi and Mishing communities.
Addressing a mammoth gathering, Sonowal prayed to the almighty that the festivity bring unity, peace, progress and prosperity for all.
Sonowal categorically called upon young minds to uphold the rich entity of the diverse communities of the state and spread love and brotherhood for peaceful co-existence of all communities in the serene state of Arunachal Pradesh.
He noted that there are large areas in the state, from the tourist point of view, which are untapped.
“If indigenous festivals are linked with tourism, it will be highly beneficial for the state”, he opined.
Emphasizing on preservation of natural wealth, the Assam CM said, “We must protect healthy democracy but should not disturb natural assets in the name of development”.
He thanked Prime Minister Narendra Modi and MoS Home Kiren Rijiju for their “special attention and emphasis towards faster development of the North East region in education, health and connectivity”.
Sonowal appealed all to join hands in the mission to make the northeast free from corruption, pollution and terrorism.
He also appreciated Mebo MLA cum festival patron Lombo Tayeng and the people of Mebo for organizing Ali Aye Ligang in a befitting manner.
Later, Sonowal also inaugurated the conglomeration pillar of the Adi-Mishing on the occasion.
A gala cultural event is being arranged from 23 to 25 February at Bakkul festival ground, where the Mishing and Adi communities from Assam and Arunachal are performing traditional songs and dances.
Numerous food and handicraft stalls have also been set up to pull a large crowd. (DIPRO)