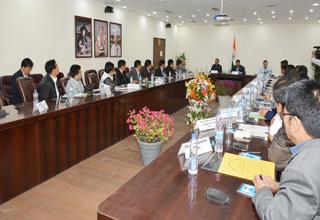 ITANAGAR, Feb 24: Chief Minister Pema Khandu and Deputy Chief Minister Chowna Mein held a detailed consultative pre-budget meeting with representatives of Community Based Organizations (CBOs) of the state here this morning.
While the umbrella organization of all CBOs, the Arunachal Indigenous Tribes Federation (AITF) submitted suggestions and proposals common to all tribes of the state, individual CBOs put forward respective community specific suggestions for inclusion in the ensuing budget.
All the CBOs were unanimous in their concern over the recent incidences of rape and its aftermaths and emphasized that budget provisions be made to enhance the security scenario within the state besides involving grass root organizations in creating awareness on safety of children and women.
Majority of them also felt the need to fast track the justice delivery system, especially in rape-related cases by equipping the courts at lower levels with sufficient manpower and basic facilities and by establishing police outposts in every administrative circle.
This, they emphasized, would restore people’s faith on the judiciary and the police.
The CBOs were also unanimous on the need for giving top priority to education, health and road connectivity sectors in the budget.
Suggestions were made for immediate recruitment of teachers through the state public service commission and their posting to various schools affected by teacher shortages before commencement of the next academic session.
CBOs representing the eastern districts of the state pointed drug addiction and opium cultivation a major problem common to all. They called for budgetary provisions to wean away youths from addiction by engaging them in co-curricular activities and providing opium cultivators with alternate crops through subsidies, loans and supply of quality seeds as well as market links.
Citing communal harmony a necessity for development, the CBOs called for emphasis on cultural exchange programmes not only between the tribes of the state but also with neighbouring states, especially Assam.
Many of the CBOs also felt the need to preserve and promote indigenous culture and languages.
It was informed to the Chief Minister that few major tribes of the state have developed scripts for their respective languages and suggestions were put forth for introducing these as third language in schools falling in their respective jurisdictions.
They called for sufficient budgetary provision for recruitment of indigenous language teachers, their training and printing of text books.
Almost all the CBOs cited road connectivity, from inter-village to the Trans-Arunachal Highway, as a major issue that calls for provisions in the budget.
One of the CBOs suggested that all roads in the state be classified under different heads, like village roads, state roads, national highways, etc and the responsibility of each head be entrusted to one particular department for construction and maintenance.
Suggestions also came in for renovating or constructing new buildings of dilapidated schools, health centres, offices and other public utility infrastructure across the state; reintroducing the Chief Minister’s Health Insurance scheme; establishment of a cultural heritage centre; supply of quality and subsidized vegetable and cash crop seedlings; mobile connectivity; training of police personnel; introduction of separate wing of traffic police in the Home department; funds for celebration of major indigenous festivals; establishment of an office of Divisional Commissioner (Central); periodic special recruitment drives for youths of Tirap, Changlang and Longding districts, etc.
Chief Minister Pema Khandu welcomed the suggestions submitted and assured that these will be accommodated as much as possible in the ensuing budget 2018-19.
He urged the CBOs, under the umbrella of AITF, to create awareness amongst their community members about the government’s flagship programs and lead them to become active members of ‘Team Arunachal’.
He specifically sought the assistance of the CBOs in making people understand the negative impacts of seeking very high land compensation for road projects.
Pema informed that it has been his endeavour to involve all the CBOs in the planning process of the government and asked the representatives to be ready to contribute and attend more such meetings during his tenure.
He sought active cooperation from the members in his crusade against corruption for which the state government has opted for e-processing of files in all the departments.
Pema asked the AITF to submit in writing to the government of the scripts that have been developed for indigenous languages so that these can be introduced as third language in schools.
He further said that sufficient funds will be placed for celebration of major festivals of all the tribes. He also proposed to place the funds to respective CBOs through which these may be distributed to committees for celebration of the festival in different places.
For recruitment of teachers, Pema informed that the government has created 1300 posts in the Education department, of which, 1022 are for teachers. Out of the 1022 posts, 665 (540 PGTs, 125 TGTs) posts have been already handed over to the state public service commission for recruitment. Rest 357 posts will be filled up through promotion of in-service teachers as per norms.
DCM Chowna Mein participating in the pre-budget meeting informed them that the genuine suggestions from them will be incorporated in preparation of the budget.
Finance Commissioner Ashish Kundra, Secretary to CM Sonam Chombay and Special Secretary at CMO Himanshu Gupta were also present in the meeting.