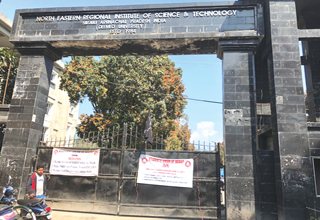 SUN vows not to back off

[ Amar Sangno ]
ITANAGAR, Feb 28: A cloud of uncertainty looms over the premier technical institute of the state as the Ministry of Human Resource Development (MHRD) fails to give an official response to the indefinite strike of the Students Union of NERIST (SUN).
The protest of the SUN, demanding immediate posting of regular Director for the NERIST entered its second day on Wednesday.
The students under SUN paralysed all vehicular movement within the premise and locked the main entrance gate while chanting slogans against the MHRD and as well as MoS Home Kiren Rijiju.
The SUN has been demanding for posting of regular director for the last four years. It has also started a social media campaign on Twitter (#Save NERIST) to post their agitations by tagging the Union MRHD Minister and MoS Home for early redressal of their demands.
The students claim that they were forced to take strong steps after the MHRD failed to meet deadline after deadlines.
Union Minister of State for Home Affairs Kiren Rijiju on Tuesday attributed internal strife among the NERIST faculty members as ‘glitches’ on the early appointment of a regular director by the MHRD. He said that an early resolution to the internal issue would pave way for the ministry to appoint a regular director.
Agitated by the obscure “internal-strife”, as divulged by the MoS Home, SUN president Banta Natung demanded to know who was responsible for the strife.
“We are not asking the MHRD for the moon or the stars. Our demand is simple and basic; we only want a regular director as early as possible,” said Natung, while vowing that the students would not back off until the demand is met.
Surprisingly, all stakeholders are denying any knowledge of the “internal-strife” as claimed by the MoS Home, who attributed the delay in appointment of a regular director to the MHRD.
“I really don’t know whether there is an internal difference among the faculties. If the MoS is saying this there must be something. But I have no idea,” said Registrar Dr R P Bhattarcharjee.
NERIST Faculty Association President Professor Pradip Lingfa also denied the same stating that faculty members have no role or contact with the MHRD.
“Our role is limited to teaching, research and development activities” Lingfa said, and questioned, “Why would any faculty member meddle with the appointment of regular director? Moreover, why would the MHRD listen to any faculty complaint on whom to appoint?”
Meanwhile, Deputy Registrar Mai Ranjit also said some group had written to the MHRD requesting appointment of a director with past experience in the institute (NERIST) for effective administration.
However, the deputy registrar did not reveal who wrote to the MHRD in favour of internal faculty.
Two senior professors from the NERIST, Professor Binay Singh of the Forestry department and Professor HS Yadav of Chemistry department were on the panel race alongside Prof BV Ramana Reddy of the University of School of Information and Communication Technology and Guru Govind Singh Indraprastha University New Delhi.
Professor Reddy was reportedly selected for the coveted post and was supposed to join by 28 December, 2017. However, it was later postponed owing to internal complaint lodged by the few faculty members whose name are yet be known.
Sources in NERIST informed The Arunachal Times that ever since then Director, Professor Dipankar Paul was removed unceremoniously, the administration and management have fallen apart.
The research and development areas are abysmally poor and in a sorry state. The class rooms are not in order, and the labs are in dilapidated condition, resulting in NERIST slipping below 150 ranks in the MHRD’s National Institutional Ranking Framework (NIRF).
Later today, Prof Tamo Mibang Vice Chancellor of Rajiv Gandhi University (RGU), who is temporarily looking after the institute, rushed to the agitating students to pacify them.
Prof Mibang appealed to the SUN to reconsider their agitation and invited them to negotiate. However, he was unable to convey any official communication from the MHRD and instead requested the MHRD to relieve him from the post of director-in-charge.
The SUN has refused to meet MoS Kiren Rijiju who is flagging off Naharlagun -Anand Vihar Arunachal Express along with Union Minister of Railways Rajen Gohain at Naharlagun tomorrow.
The SUN stated that they would welcome the MoS with black flags, if he happens to visit NERIST.
Rijiju on his Facebook page took full responsibility for the inordinate delay in finalizing a regular director on behalf of the MHRD.
He said, “During my last visit to NERIST, the HRD Ministry had informed me that the new director could be appointed by December 2017. On that basis I assured the students”.
The MoS further added that the matter got stuck in the Search cum Selection Committee for various reasons, including the cumbersome process as per laid down rules and regulations, adding that nothing could justify the delay of many months.
“I sincerely apologise to the NERIST fraternity on behalf of the MHRD. Today I spoke to Minister & Secretary HRD and conveyed the situation. They promised to get back to me soon,” he stated.