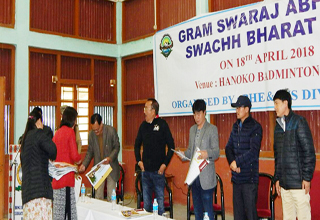 ITANAGAR, Apr 18: The Swachh Bharat Diwas was observed as a part of the Gram Swaraj Abhiyan across the state with various programmes and activities.
BHALUKPONG: Union MoS for Home Kiren Rijiju and Parliamentary Secretary Kumsi Sidisow took part in a cleanliness drive on Wednesday at Bhalukpong as part of the Gram Swaraj Abhiyan.
The abhiyan is being organized in West Kameng district since 14 April, during which, cleanliness drives were organized at Model Village, Police Colony, SSB Colony, Upper Bhalukpong and Bazar area.
Later, addressing a public gathering at Bhalukpong general ground, the Union MoS for Home highlighted the achievements of the union government and asked everyone to cooperate with government for an honest and inclusive development.
The minister also informed that the Union government has set the target of achieving the goals of all schemes by December 2018 instead of March 2019.
ROING: An interactive programme was held with the central observers of Gram Swaraj Abhiyan at Reko, Mayu II on Wednesday, as part of Swachh Bharat Day celebrations.
Central observers Mahindra Pratap and Sudhir Kr Sinha interacted with the public, NGOs, panchayat leaders, bank managers of SBI, BOI and HDFC and HoDs.
They were informed about the status and implementation of centrally sponsored schemes in Lower Dibang Valley district and heard the grievances and feedback of the public regarding the schemes.
The central observers noted that the banks should inform the public about the central schemes, like the Pradhan Mantri Suraksha Bima Yojana, Pradhan Mantri Jan Dhan Yojana, etc so that the public can take benefits from them.
The observers also inspected various villages during the day.
ZIRO: Swachh Bharat Parv was observed as a part of the Gram Swaraj Abhiyan at Hanoko on Wednesday.
Deputy Commissioner Kemo Lollen said that cleanliness and hygiene should be a part of our religion and religiously practised. The government is trying to enforce cleanliness practices through various schemes and programmes, however, the onus lies with the people, as to how receptive and proactive we are, he added.
“The ODF status attained by Lower Subansiri, which is the second in the state, has to be sustained and continuous efforts made to impart knowledge about hygienic sanitary practices through IPC and IEC programmes,” he added.
He also informed the gathering about the various programmes to be held under the Gram Swaraj Abhiyan and requested all to attend the programmes that will held at various locations in Ziro.
These programs will provide information on all the government welfare schemes under various departments. Free LPG connection under Ujjwala Yojana and subsidized electrification items under Gram Ujjala Yojana will be provided on spot, he further informed.
PHE Executive Engineer, Kago Habung in his keynote address dealt on the provisions under Swachh Bharat Mission.
Besides providing financial assistance for the construction of IHL, the department will also assist in rectifying drainage systems causing water loggings, etc under solid liquid waste management, he informed.
ADC cum DPDO Nending Chatung appealed to all the PRI members to attend the programmes under Gram Swaraj Abhiyan and disseminate the information to the public.
ZPC Hage Kobin also spoke on the occasion.
The DC later also joined the Gram Ujjwala Yojana, held by the APEDA at Hari and interacted with the beneficiaries.
SEPPA: Swachch Bharat Diwas under Gram Swaraj Abhiyan was observed across East Kameng district in a befitting manner.
East Kameng DC Gaurav Singh Rajawat and EE (PHE&WSD) Bharat Sonam exhorted all to spread the message among the masses about the benefits of good health and hygiene practices and usage of sanitary toilets.
The programme was coordinated by the Public Health Engineering and Water Supply department of the district under the close supervision of the district administration.
Later, the DC in a meeting with HoOs urged them to reach out to poor and ensure to bring the fruits of development to the doorsteps of every genuine household. Such kind of novel initiatives should not be confined to as one-day event rather it should be carried out every day, the DC said.
PANGIN: Swachh Bharat Day was also observed all over Siang district.
Gram Sabhas were held at all villages, where people were informed about the importance of cleanliness and the achievements made under Swachh Bharat Mission (Gramin).
The villagers were encouraged to maintain good health and sanitation practices.
Mass social services were also conducted.
The programme was also observed at Kaying, Kerang, Tarak villages.
HAWAI: Anjaw, the eastern most district also joined the rest of the country in observing Swachh Bharat Diwas on Wednesday.
Deputy Commissioner Mamata Riba, who spearheaded the Swachhata Divas campaign from Hayuliang camp office, called upon the citizens to carry forward the mission of Swachh Bharat and the campaign for clean and green Arunachal.
Mass cleanliness drives at Hayuliang, Hawai, Kibitho and various other places and awareness programmes were organized as part of the day. (DIPROs)