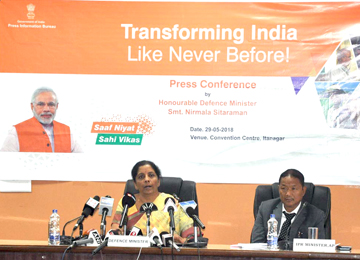 ITANAGAR, May 29: Union Defence Minister Nirmala Sitharaman on Tuesday said the Centre is planning to lay optical fibre cables (OFC) in all the border areas to mitigate connectivity problems being faced by both defence personnel and the civilian population.
The minister, who was speaking of the achievements of the four-year-old Narendra Modi government, responding to media questions said, “We will soon start work on extension of optical fibre cables in the border areas. The union cabinet had discussed the issue and sanctioned the additional fund only ten days before.
“Soon all the border areas along the Indo-China border will be connected with OFC, which will greatly improve the mobile and telephone connectivity, besides improvement in radio frequency,” she said.
Sitharaman, during her recent visit to Kibithoo, the last border village in Anjaw district of Arunachal Pradesh, was told that the people of the area cannot access All India Radio due to poor frequency, but can access Chinese radio frequency. The area also has poor mobile network.
Replying to a question on empowerment of women in border areas by recruiting them in defence forces, the minister said women in the country are working as fighter plane pilots and the government is trying to recruit them in other areas too.
“Those women who have not got permanent commission have approached the court for their rights and the matter is now sub-judice. However, I am considering how to give permanent commission to women in defence forces,” she added.
When asked about the government’s stand on media reports about mining activities by China near Arunachal territory, Sitharaman said, “I have to get the details of it. I too saw the report in media but I cannot comment based on that at this point of time.” (PTI)