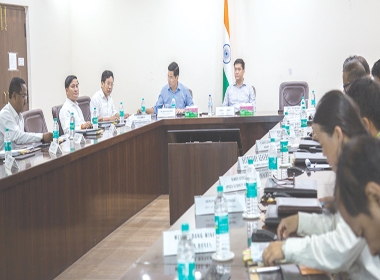 ITANAGAR, Jun 11: Chief Minister Pema Khandu has beckoned the Sports Authority of Arunachal (SAA) and the sports department to work proactively for the development of sports in order to tap the immense potential of the state’s youths.
Chairing the second annual general meeting of the SAA here on Monday morning, Pema said there is an urgent need of coordination among the SAA, the sports department, and various sports associations, including the Arunachal Olympic Association, for the growth of sports and sportspersons in the state.
“There is no dearth of talent. But we have failed to nurture these talents by providing them with just the basic facilities,” Pema said.
The central government is giving massive impetus to the sports sector through programmes like Mission Olympics 2020, while the ambitious ‘Khelo India’ project is aimed at scouting and nurturing talents for the forthcoming Olympic Games, he said.
“The concerned state agencies have to give their best to produce world-class sportsmen and women from the state. It is time to buckle up and streamline the work culture for accountability and responsibility,” he said.
The CM urged the department to focus on its core subject of developing sports and producing sportspersons, instead of focusing solely on construction works.
He also called for streamlining the recruitment process in various departments under the sports quota.
As of now, 10% jobs are reserved under the sports quota in the police and forest departments, while 5% is reserved in the rest of the government departments. However, the forest department is yet to implement the 10% reservation policy, and not all the departments are abiding by the 5% quota system for meritorious sportspersons.
Pema observed that there are many loopholes in proper implementation of the policy, and requested Sports & Youth Affairs Minister Dr Mahesh Chai and the sports & youth affairs secretary to study and streamline the policy.
As to the draft bill for bringing the SAA under the ambit of an act, the chief minister advised the sports minister to have a look at the draft bill and bring it up in the state cabinet for discussion.
Dr Chai, who recently got the additional charge of the sports ministry, also observed that the government has not been able to tap sporting potentials up to the mark, and said the department has a lot to do in this regard.
He also expressed concern over the fact that those recruited under the sports quota do not continue playing, defeating the very purpose of the reservation policy.
On the recent recruitment of coaches by the SAA, Dr Chai suggested that continuation of their services should be based on their performances, in order to raise the quality of coaching.
He also said that fund allocation to non-performing sports associations should be curtailed, so that those performing and contributing well may be given preference.
Co-opted Member of the Regional Directorate of the Sports Authority of India, Subhash Basumatary, emphasized on organizing more sports activities at the school level. He said the state has very good existing sports infrastructure, which need to be utilized to the optimum.
He expressed surprise that the department is not utilizing the services of a renowned football player like Gumpe Rime, who hails from the state.
Basumatary lauded SAA Chairman Bamang Tago for his efforts in developing sports in Arunachal Pradesh, and sought the cooperation of all stakeholders.
Tago highlighted the activities carried out by the SAA, and its roadmap. He proposed instituting annual sports awards like sports association of the year, coach of the year, sportsman/sportswoman of the year, sports administrator of the year, and lifetime achievement awards for promotion of games and sports in Arunachal Pradesh.
Such awards would go a long way in encouraging all stakeholders and achieving excellence in games and sports, he said.
Also present in the meeting were Sports & Youth Affairs Secretary Dani Salu and members of the SAA’s general body.