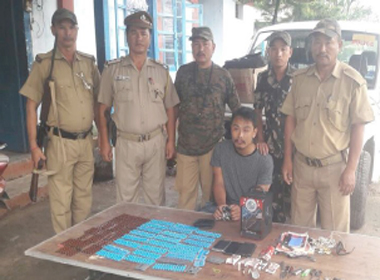 Correspondent
RUKSIN, Jun 18: The police here arrested a drug peddler with psychotropic drugs during routine checking at the check gate here on Saturday.
The peddler, who has been identified as Edi Gogoi (30), a native of Namsing village under Mebo police outpost, was found in possession of 60 strips of banned ‘Spasmo Proxivon’ capsules, and suspected brown sugar.
The accused was produced before the magistrate here on Monday and remanded to seven days’ police custody. A case under the NDPS Act has been registered against him at the police station. Gogoi already has cases registered against him at the Pasighat and Naharlagun police stations.
He confessed during interrogation that he along with four accomplices has been involved in illicit drugs trade for several years in Arunachal Pradesh.
The police did not reveal much about the ongoing investigation, but said they have information about an interstate racket of drug smugglers.
“We have got information about an interstate racket of drugs smugglers who are actively involved in the illicit trading. We have taken every possible step to nab other members of the drug trafficking racket,” said Ruksin PS OC Limar Ori.