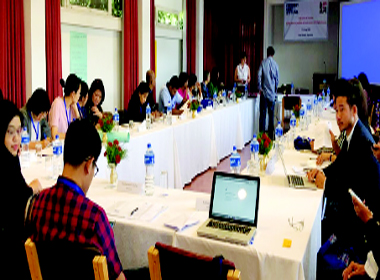 KATHMANDU (Nepal), Jun 18: The three-day meeting of journalists from across South-Asian countries under the aegis of the International Federation of Journalists (IFJ) got under way at the Summit Hotel here on Sunday.
Held in collaboration with Friedrich Ebert Stiftung (FES), a Germany-based NGO, the workshop has representatives from 13 different Asian countries, including Afghanistan, Pakistan, India, Nepal, Bhutan, Sri Lanka, Bangladesh, Thailand, Malaysia, Indonesia, Cambodia, Philippines and Australia.
The three-day event is primarily focused on the challenges in journalism and building power for journalists and media workers in the digital economy.
Convening the inaugural session, IFJ Director Jacqui Park said the profession of journalism across the world is facing common challenges, including safety and security of journalists on the field, and excessive censorship by democratic governments.
“Collective efforts and strengthening unions across the region and the world are the only remedy to fight the pressing challenges to the profession,” Park said.
IFJ President Jane Worthington observed that the traditional economic model of journalism is collapsing as advertisers move online and into social media, “and the public has become accustomed to receiving information for free.”
She lamented that the unions are losing their place in today’s modern media industry, as the working patterns are radically different from the past when the unions were strong.
“Our focus must be to understand the impact technological, economic and social changes have had on our industry and our unions,” she said.
The workshop identified several challenges to the profession, such as disinterest of young journalists in joining the unions, identity crisis of unions, aggressive approaches towards the media by democratic governments in the region, the manipulation of media owners, the financial instability, trust deficit, etc.
Online news site The Wire’s founding editor Sidharth Bhatia of India, and Stacy De Jesus of Philippines, representing ‘Rappler’, a social media news organization, made presentations on ‘Journalism disrupted’ and ‘Digital disruption’.
The IFJ later paid tributes to journalists across the world who were killed on the line of duty, including Shujaat Bhukari, editor of the Rising Kashmir, who was slain on Friday by unidentified assailants.
On the second day of the session, the house opined that engaging young journalists by addressing their issues to instill a sense of security in the job and develop a sense of community and belongingness among them would build a stronger union.
The house also opined that voices for economic benefits and against gender inequality, and solidarity translated into measurable steps would make the IFJ stronger.
Moazum Mohmmad of Young Journalists’ Association of Kashmir, and Samandar Rahimullah of Afghanistan presented the media scenario in conflict zones and spoke about how journalists have to face repressive laws and actions from the armed forces and insurgents alike.
“There is no safe house in Afghanistan to move out journalists working in war zones. We have been appealing for it, without results,” Rahimullah rued.
In order to strengthen the union’s activities across the globe, IFJ President Jane Worthington presented the ‘Union-to-Union Global Project’.
Indian Journalists Union secretary general (elect) Sabina Inderjit and Arunachal Pradesh Union of Working Journalists (APUWJ) president Amar Sangno are representing the Indian Journalists Union at the IFJ-FES meet.