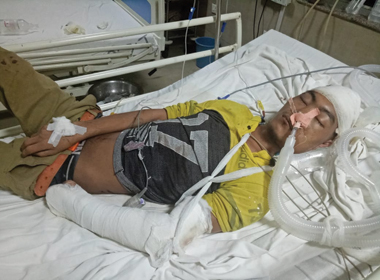 Staff Reporter
ITANAGAR, Jun 20: One Winsing Ngaimong, son of Dapjung Ngaimong and a resident of New Khamlang village under Miao in Changlang district, who reportedly fell from a running train, is currently undergoing treatment at SN Hospital in Agra.
According to an Arunachal Students Union Delhi (ASUD) release on Wednesday, its members led by its president Nilly Likha Akash and general secretary Dewan Natung had visited Agra to enquire about Winsing’s status.
Winsing, who is in his early ’20s, is still unconscious and has been admitted to the ICU and is on ventilation.
Speaking to The Arunachal Times, the ASUD president informed that the union came to know about the incident through a Facebook post.
“We saw the post at around 12 noon on Tuesday, made enquiries and later reached Agra to know his status. The incident could have occurred day before yesterday or earlier, we are not sure since there was no one with him. It is learnt that Winsing was travelling back home and the incident happened when he went to use the toilet. His phone was not in his person as he had left it for charging in the compartment itself,” he said, adding that it is not clear whether he was pushed or it was merely an accident.
He further stated that Winsing was brought to the hospital nearest to the railway station by army personnel. They found his Aadhar card from his person and posted about the incident at the social networking site.
As the ASUD has been unable to make contact with the victim’s family, Akash has requested concerned citizens to contact him on the number 8800310907 if there is any knowledge of his family.
The ASUD president further informed that they have informed MoS for Home Affairs Kiren Rijiju about the incident and they are planning to shift Wingsing to a hospital in Delhi from Agra once he gains consciousness and recovers.