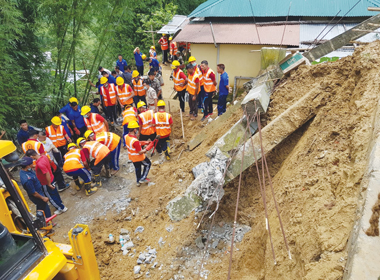 [ Nellie N Manpoong ]
ITANAGAR, Jun 24: Five labourers were buried alive when a 15 feet retaining wall of an under construction building collapsed over their temporary shed, here at Donyi Colony on Sunday at around 6.30 AM.
There has been incessant rainfall every night for the past few days, and this is the first incident this monsoon season where lives have been lost.
The police and administration received the news at around 7 AM, and personnel of the National Disaster Response Force (NDRF), the State Disaster Response Force, the fire services, and rapid response team- led by the DMO -were alerted.
The rescue team arrived between 8.30-9 AM with heavy tools and an excavator, and managed to find two bodies after a gruelling four hours of drilling and cutting through an approximately five tonne concrete wall.
It took another two hours to rescue the bodies of the remaining three labourers.
The labourers have been identified as Pappu Gand (19), Jiten Telenga (20), Kanu Konwar (25), Pappu Katiya (22) and Babloo Telenga (19).
Originally from Rotua in Behali constituency of Biswanath district, Assam, the labourers had arrived in the capital merely two months earlier, and were engaged in working for another house located adjacent to the retaining wall.
The contractor in-charge of the labourers informed that the labour shed was a unit for four labourers, and a fifth labourer from another unit had arrived to spend the night there.
Capital Complex DDMO Moromi Dodum Sonam informed that the retaining wall was constructed by one Pani Tapoh to protect his ongoing house construction, and the house where the victims were living, was tin roofed and not concrete.
Capital Deputy Commissioner Prince Dhawan arrived at the spot to access the situation and informed that the retaining wall did not have proper hold in the soil, and the rains also caused the soil to loosen up, causing the wall to collapse.
He reiterated his appeal to the people of the capital to refrain from engaging in illegal earth cutting at vulnerable locations.
The deputy commissioner said that the NDRF team has informed that the soil is still loose at Donyi Colony, and appealed to those living in the lower reaches of the colony, to vacate the area to avoid unforeseen disasters.
“If the rains continue, then there could be more disaster in this particular area”, he added.
On whether any action would be taken against the owner of the collapsed wall, he said that the administration would look into the matter at the earliest.
He further informed that citizens can call on 1077 for any disaster-related emergency or to report on reckless earth cutting in high-risk areas by BSNL, Airtel, Jio and Vodafone users.
Speaking to reporters, State Disaster Management Secretary Bidol Tayeng informed that the department had a meeting with disaster management offices of the district and issued directives to be alert in the monsoon season and avert such incidents.
He also informed that several warnings had been issued for people to shift from unsafe location to avoid such unfortunate incidents.
Several officials also opined that the base of the retaining wall was poorly built, besides the rain loosening the soil.
The DDMO is also trying to make contact with the victims’ families and they would be paid ex-gratia as per norms.
State BJP vice president Tame Phassang also arrived at the spot and expressed grief over the unfortunate incident. (With inputs from DIPRO)