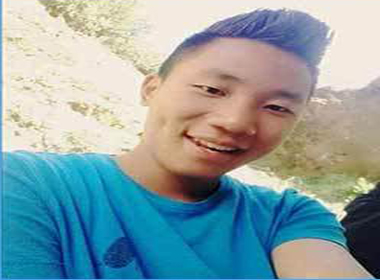 [ Amar Sangno ]
ITANAGAR, Jun 24: The mystery surrounding the chilling murder case of late Toko Yame at Tawang in September 2017, has baffled many citizens across the state. As the investigation on the gruesome murder incident is over and the charge sheet is about to be submitted by the Special Investigation Team (SIT) to the Tawang district police, many questions remain unanswered.
Toko Yame, a school boy, went missing after a scuffle broke out on 16 September, 2017 involving students of government higher secondary school and JNV Tawang. His semi-decomposed body was found a week later at the Biga waterfall, near the JNV, on 23 September.
In a joint press conference held at the Press Club here on 15 May last, bereaved father Koya Yame had alleged that his son was abducted and brutally tortured before being killed and thrown at the Biga waterfall-at the periphery of Jawahar Navodya Vidyalaya in Tawang by the perpetrators.
If the bereaved father’s claim turn out to be true, the chilling murder case of the school boy amounts to hate crime.
Then Dy SP Tawang G Dajungju informed The Arunachal Times that they had conducted search operations thrice at the Biga waterfall where Toko’s body was later found.
Sensing that the scuffle that led to the disappearance of Toko was turning communal, various organisations and civil societies of both Tawang and East Kameng districts, including the All Nyishi Students’ Union (ANSU) rushed to Tawang on damage control mode and signed a joint resolution on 22 September, 2017, in presence of the deputy commissioner of Tawang to maintain peace and tranquility.
The bereaved family members condemned the joint resolution, claiming that it was made without taking the family members into confidence, leading the All East Kameng District Students’ Union (AEKDSU) to withdraw from the joint resolution after Toko’s body was found.
An officer in the SIT, requesting anonymity, disclosed that 35 persons have been named as accused in the charge sheet. However, the charge sheet is yet to be submitted to the district police. The officer also went on to disclose that among the 35 accused, some are adults while some are juveniles.
It is also learnt that over 20 people were detained for interrogation and later arrested at Tawang. However, they were granted bail by the court.
The aggrieved family has been alleging that the district police have been shielding the accused.
Meanwhile, a rally demanding action against the killers is schduled to take place on June 25 from Akashdeep to Tennis Court on June 25 under the banner of the All East Kameng Students’ Union.
The rally is being supported by the All Tawang District Students’ Union, the All West Kameng District Students’ Union and the East Kameng Social Welfare and Cultural Organisation, demanding immediate justice for Yame.
The AEKDSU alleges political high-handedness to weaken the case, as several officers from the Tawang police and the SIT involved in investigating the case, were allegedly transferred within a short span of time.
“This rally would be our last democratic movement. We will give a deadline to the authority to book the culprits, and if they fail again, we will be compelled to impose economic blockade on Tawang district”, said Nera Gumro, GS AEKDSU.
“Criminals do not belong to any community, and they shouldn’t be shielded or protected”, Gumro added.
The AEKDSU had earlier questioned the efficiency of the state police’s Special Investigation Team (SIT) and demanded a CBI inquiry to probe the unsolved murder case.
“We have faith in the establishment and law, and believe that the families of the our late brother will get justice, especially when the chief minister is from Tawang district. He should also ensure transparent and speedy investigation so that perpetrators are brought to justice” the union stated.
Meanwhile, the Director General of Police and Superintendent of Police Tawang did not respond to the query sent by this daily on the said case.