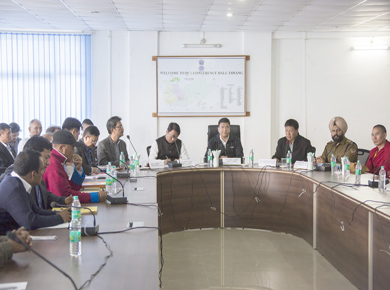 TAWANG, Jun 26: Chief Minister Pema Khandu on Tuesday urged the bureaucrats of the state to educate themselves first to disseminate information effectively about all flagships programmes to the people.
Describing the bureaucrats as the backbone of any government, with great responsibility in taking the state ahead, the CM requested them to play active role in bringing awareness to the people on all flagships programmes.
Addressing the review meeting on the status of all centrally sponsored schemes and departmental performances in Tawang district here on Tuesday, the CM informed that construction of tunnel bypassing Sela Pass will have its tender floated this year.
He also informed that state’s medical college will begin its session from this year with seat intake of 50.
The deputy commissioners are being given more powers and roles in formulation of schemes and will also have the final authority on deciding on disbursing loans, such as on Deen Dayal Swavalamban Yojana, the CM said.
He further informed that the DCs have also been empowered to decide on proposals under SIDF, along with the local MLAs and other elected members.
“The next cabinet to be held will finalize on formation of Service Selection Board to recruit group C posts under all directorates and departments. The board will also conduct recruitment for posts at district level but will allow applications only from that district,” the CM further informed.
He said due to bad recruitment practices, many corrupt and incompetent ones have been employed in the government, rendering the system weak and ineffective. By bringing reforms in the recruitment process, he hoped that the work culture in the system would be improved.
Tawang MLA Tsering Tashi and Tawang DC Sang Phuntsok also gave their inputs. (PRO)

‘Arunachal only state where no scheme to empower divyangjans operational’