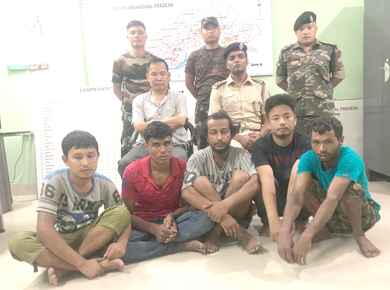 NAHARLAGUN, Jul 21: The police here arrested five persons from various locations of the township recently and seized a 9 mm pistol, along with two live rounds, and around 85 grams of suspected heroin from their possession.
The arrested have been identified as Nada Tatung (25), Shankar Bora (33), Jiten Biswas (28), Amir Hussain (32), and Mukhtar Ali (22).
All five are currently in police custody.
This operation of the police lasted many days and involved careful follow-up of leads generated by each arrest. The first lead was received when SI SS Jha spotted one of the suspects with a pistol while on routine patrol.
The police informed that all of the accused are part of a nexus involved in supplying drugs from Assam and beyond, with Banderdewa serving as the transit point for the capital complex area.
Capital Complex SP M Harsha Vardhan said the recovery of the pistol has raised concerns about the involvement of the accused in other criminal activities, such as extortion and robbery.
“These arrests are likely to disrupt the network of suppliers and peddlers in the capital complex area,” he said.
The Naharlagun police station team was led by SI Jha, and the team comprised Inspector Nikom Riba and constables L Ronrang, Tsering Tashi, T Dada and R Tamang.