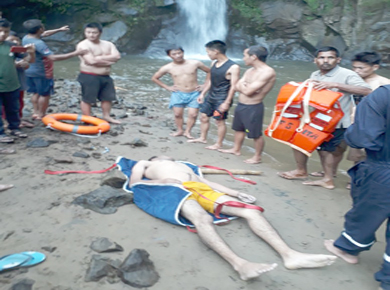 ITANAGAR, Jul 21: A youth identified as Vijay Chettry (19) drowned in Leffar Nallah near Donyi Polo Vidya Bhawan here at around 3 pm on Friday.
Itanagar police station ASI AK Jha informed that Chettry had gone to the stream, which is fed by a waterfall, for a swim with his friends and cousins. He drowned after he was submerged under the waterfall’s pressure.
His friends and cousins were unable to pull him out, and had to seek help from the locals and police.
Chettry’s body was later retrieved with the help of locals and personnel from the police and the State Disaster Response Force.
“There is a warning signboard in the area, cautioning that it is a danger zone, but the board was seen thrown in the bushes,” the ASI said.
Chettry was studying at a college in Assam, and had arrived home for the holidays two days ago.