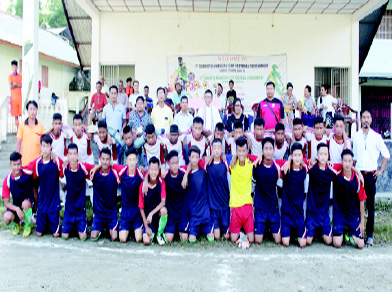 DOIMUKH, Jul 24: Govt Hr Sec School (GHSS) Doimukh will represent Papum Pare in both boys’ and girls’ categories in the state level Subroto Cup.
The school beat GHSS Balijan 4-1 in the finals of the boys section and GSS, Rajiv Gandhi University campus in the girls sections to become winners of the district level tournament.
The finals were played at Rono Ground here on Tuesday.
Teli Nana Camdir of GHSS, Balijan was declared as the best player while and Tarh Khyokam of GHSS, Doimukh became the highest scorer in the boys’ category.
Department of Indigenous Affairs Chairman Nabam Atum attended the final day. He advised the players, particularly those who have chosen sports as their career, to take up it sincerely and practice hard to achieve success. He also informed them about job reservation for meritorious sportsperson.
This year, GHSS Doimukh, Balijan, GSS RGU, Mani, Toru, Kimin and BK Mission took part in the boys’ category and GSS Mani, RGU and GHSS Dpoimukh took part in the girls’ category, informed APO CK Yab.
The tournament was organised by GHSS, Doimukh under the banner of DDSE, Yupia.
In Anjaw, GHSS Hayuliang won the district level Subroto Cup beating GHSS Hawai in the final.
The winner will represent Anjaw in the state level Subroto Cup.
The girls’ category of the tournament has been introduced in the district, and the GHSS, Hayuliang won it defeating KGBV Hawai. (DIPRO)

APSCW c’person urges women to speak up for their rights