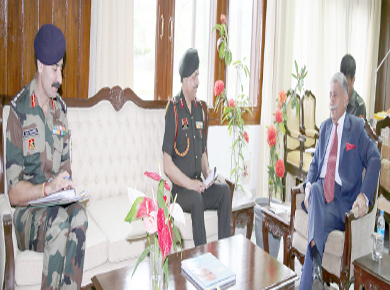 ITANAGAR, Jul 24: Advocating establishing National Cadet Corps (NCC) units in all the district headquarters, Governor BD Mishra said “maximum number of eligible students must enroll for the training.”
He said this during a meeting with Additional Director General of the NCC – North East, Maj Gen Raju Chauhan, who called on the governor at Raj Bhavan on Tuesday.
Education Secretary Madhu Rani Teotia and 1 Arunachal Pradesh NCC Battalion Commanding Officer Col RK Sharma were also present in the meeting.
The governor said the activities under the NCC programmes should be taken up with more thrust towards nation-building, and involving larger number of students.
“Our cadets must have the opportunities of attending regular NCC trainings and take A, B and C certificate examinations of NCC and work hard to get selected for the Republic Day parade,” he said.
Mishra said the students of Arunachal Pradesh have huge potential.
“With proper guidance and motivation, they can excel in many fields and can become role models for the youths of the northeastern region,” he said.
The governor requested the officers to prepare a time-bound plan to start the second Arunachal Pradesh NCC battalion, which is sanctioned for Tawang, at the earliest.
On the issue of the academic losses of cadets in the final months of their academic session because of their participation in the Republic Day NCC camp, the governor proposed conducting the All India NCC camp at Delhi in the month of August to coincide with the Independence Day celebration.
He said that by changing the date of the All India camp, the academic interests of the students would be taken care of.
“This will not cause any logistic problem in Delhi, and it will be connected to another important national event of Independence Day,” he said.
The ADG and the education secretary briefed Mishra on the various programmes of the NCC in the state. They also held a discussion on NCC training area and establishing an NCC academy in the state.
CM meets ADG
Chief Minister Pema Khandu also held a discussion with the top officials of the NCC headed by Maj Gen Chauhan, for the NCC’s expansion in Arunachal.
The CM sought to expand the Indian Military Cadet Corps in all higher secondary schools of Arunachal by raising NCC units in all the uncovered schools.
He said upgrading the 22(I) Coy in Pasighat to a full-fledged battalion and raising another NCC battalion in Tawang would help in filling cadet vacancies in those schools.
He appealed to the Centre for a separate group headquarters of NCC to have better command and control over its two proposed NCC units, including the existing battalion in Itanagar.
The CM assured the visiting NCC officials of providing infrastructure, manpower and financial support for expansion of the NCC in Arunachal. (PRO to Raj Bhavan & CMO)